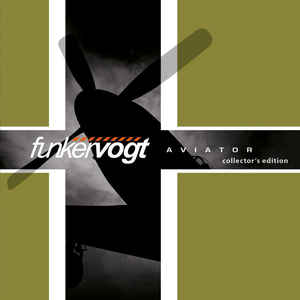 Background/Info: Repo Records goes on re-releasing some albums from Funker Vogt’s back catalogue. The so-called ‘collector’s Edition’ is always something special. Next to the original full length released in 2007 on Synthetic Symphony you’ll get a bonus CD featuring rare- and/or unreleased tracks, the EP’s “Club Pilot” and “White Trash” plus a DVD with extras.

Content: “Aviator” revealed Funker Vogt at its best. Driven by the creative power of Gerrit Thomas and the heavy, charismatic vocals of Jens Kästel this work revealed a few new hits in the band’s impressive discography. The band’s trademark always been a powerful, danceable sound carried by solid bass lines, this unique bleeping sequences and elevating choruses with Jens’ impressive vocals on top.

The 2nd disc features interesting rarities and unreleased material plus 2 EP’s, which weren’t easy to get back in time. And here again Funker Vogt reveals great songs and a constant power. This extra disc is not made of crappy CD fillers, but brings a real bonus to the disc.

+ + + : We all have our favorite Funker Vogt albums and even if “Aviator” isn’t my personal favorite one, it’s a great production, which revealed several new ‘hits’ for the band. Funker Vogt became a leading dark-electro formation because Gerrit Thomas created a very personal sound DNA, which you can directly recognize. His music is elaborated and punchy while Jens Kästel was a great singer and live performer. But this album also is a must have for all fans. Funker Vogt and Repo records always took care to release something ‘unique’ as a nice addition to the original album. I especially enjoyed the ‘making of’ section featured at the DVD featuring interviews with Gerrit and Jens.

– – – : The only reproach I can imagine about this album and Funker Vogt generally speaking would be the somewhat repetitive sound formula. But if you like this band you’ll only, but enjoy “Aviator” even more than 10 years later!

Conclusion: I’m not always fond of re-releases, but the ones of Funker Vogt released as “Collector’s Edition” are simply great and always adding a real extra.