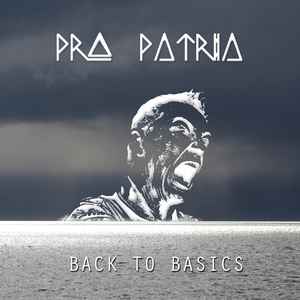 Background/Info: Belgian EBM formation Pro Patria gained some recognition during the 90s. The consecration of their Front 242-inspired body music should be an album and an EP, which were planned to be released on Celtic Circle Records. But the German label went bankrupt and both releases never saw the daylight. The band disappeared from the radars, but the EBM community didn’t forget Pro Patria. The single member on board, Peter Vercauteren (PVC), reactivated the project and this new album has been released 20 years later.

Content: The title of the album clearly reveals the influences and sound approach of Pro Patria. We’re going back to the essence of EBM, but the inspiration is no longer comparable to Front 242. The sound became darker and the vocals harsher. It sometimes makes me think of Vomito Negro, but the songs especially reflect the ‘dark Belgian spirit’ from the late 80s and early 90s. Some songs reveal a more sophisticated approach. The album also features the song “Pray For Salvation”, which was originally released in 1997 and still sounds very accurate.

+ + + : Pro Patria is no longer comparable to its early work (released on cassette format) and yet it remains pure- and 100% Belgian EBM. This retro-like approach will appeal for the fans of old-school EBM. I like the cold sound treatments and the somewhat unpolished production. I’ve been impressed by the enraged vocals, which perfectly fit to the oppressive, cold sound. I’m more into a song like “The Vampire Girl”, which is more sophisticated and carried by a great and deep bass line.

Conclusion: This album reminds us of the golden years of Belgian EBM; a time where Belgium became a very influential country for this music genre. I think it’s a pity Pro Patria never got an album released on CD format back in time because they had the skills to reach a wider recognition.

Best songs: “Never Back Down”, “The Vampire Girl”, “There’s No Light”.