Second voice on this great new song “50 Shades Of Gay” is nobody else but London-based artist Valkyrie Beestings, who some of you might remember from the Junksista track “likeyourshoes”… Val accepted replying to our few questions. 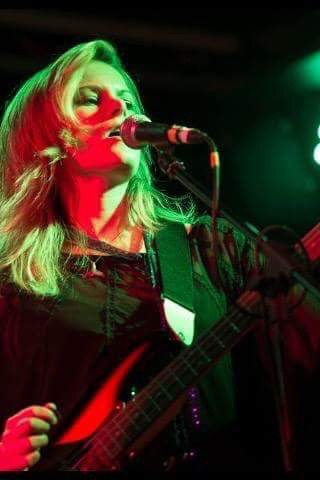 SL: So Val, what does the 17th of may (international day against homophobia and transphobia) mean to you in particular?

V. Very important. I’m part of the London gay scene and I wish I could say I don’t know of any attacks but I’ve known of several that have affected our community even in London & it’s supposed to be civilised here! Sadly we cannot be complacent as civilisation is fragile. The more we can spread the message that human rights means ALL rights the better across the world.

SL: Ad can we consider you as an engaged artist in some ways?

V. I’ve sometimes wondered if I’ve been engaged enough? Visibility is important so the fact I’m out means I have some influence. I organised an 80s warehouse party and Junksista came over from Germany to play a gig with THE DEVICES in Hackney. We got a really awesome DJ to play and I collected a bucket of money for Stonewall. Recently I’ve played a number of charity gigs for various things such as mental health charity MIND with The PRISCILLAS who I play lead guitar for and LENE LOVICH (who I play bass for) did a fund raiser for The Sophie Lancaster Foundation which is a charity set up by the mother of a Goth who was murdered in a hate crime. (You should read about it here)

SL: Very active indeed! Have you seen any evolution in mentalities in the UK throughout the years?

V. There was some incredible advances made in the 80s for freedom of expression and sexuality. It is impossible to imagine how brave those pioneers were with men wearing make-up and gender-bending fashion in an era of the miners’ strikes in the UK. I recently saw the film “Pride”. I highly recommend it as it covered some of this, but as I grew up, I think somehow things in the gay scene missed the mark for me musically as Techno, Trance, House Music, Hard House somehow took the gay-scene into club basements and left me standing with a guitar and thinking? What? I really can’t do this folk stuff! I like punk and electric guitars too much!

Thank God for nights at the Ghetto (a now extinct club behind what was The Astoria in London), Misshapes at Trash Palace and Popstars at The Scala. Music in London actually was fun in those 90s and naughties you know? I still got to dance like a twat to CHOONS! So the ‘vague’ era of straight people dancing in gay clubs and vice versa was very progressive throughout this period. Sadly London’s clubs have been suffering from the pressurised property market and we have seen some much-loved Gay clubs closing down such as The Black Cap in Camden and The Candy Bar. I don’t understand why this scene isn’t more valued because it brings so much revenue and tourism but positive moves to protect clubs are coming into play. We can be grateful that the wonderful Slimelight is still alive and well on the alternative scene at least as it is a place anyone can feel at home! So because of these clubs and music scenes, attitudes towards the LGBT community have improved massively here, but what about elsewhere in the world? There is so much work for human rights still to be done!

SL: Val, you who knows Junksista for some time now… What was your first impression you had on Junksista’s song “50 shades of gay” when you first played it before you recorded your vocals?

V. I thought it was playful and fun. That’s why I tried to get some cheeky energy into the backing vocals as Diane’s sexy German accent excited me! (laugh)