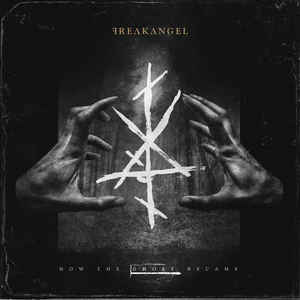 Background/Info: Since their set up in 2010 Estonian combo Freakangel didn’t stop terrorizing the electro-underground scene. It all started a rather dark-electronic way, but rapidly moved towards metal-driven influences. After four full lengths released on Alfa Matrix the band signed to Digital World Audio –which clearly seems more involved when it comes to metal music genres, to unleash their newest opus.

Content: I’ve always associated Freakangel with power and violence and that’s once again what the new work stands for. “How The Ghost Became” is a hard and merciless source of power and aggression. The harsh screaming vocals of frontman D. Darling have been joined by furious guitar playing, speed rhythms and raw electronics. The opening song, which is a kind of intro directly, announces what you might expect.

Freakangel is terrorizing the listener by heavy industrial-metal parts. The electronic arrangements are quite rough and totally fitting with the global power of the guitar, cadence and vocals.

+ + + : Freakangel is one of the few bands I know which has found this perfect balance between metal music and electronics. Both elements are really essential to their work and part of their success. The metal style became more important during the years, but they still take care to compose great and very personal electronics. Some songs have been extra empowered by epic arrangements. This album moves on there where “The Show Of Violence” stopped. It’s even more power and extra rage and I like it! Every single song is new and violent outburst revealing a band with a very unique sound DNA!

– – – : The only regret is that you no longer can be really surprised if you’re familiar with the Freakangel sound. During the years they familiarized us with this harsh industrial-metal sound so you know what to expect.

Conclusion: Freakangel is a sonic bulldozer which has lost control and simply destroys everything on its way! It remains a great band and without a shadow of a doubt the new flag holder of their label.

Best songs: “Giving Up The Ghost”, “Witness The Fall”, “Death Walks With Us”, “Hall And Back”.