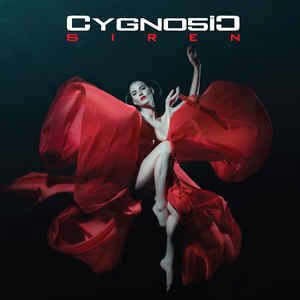 Background/Info: Cygnosic is one of the numerous talented dark-electro acts from Greece. Driven by Georg Psaroudakis this solo-project has already been active since late 2006 and can look back at numerous successful albums.

Content: “Siren” is already the 6th album and again explores the darkest corners of electronic music. The work is characterized by hopping sequences and danceable rhythms. The typical icy-like bleeps and overwhelming leads create a great and somewhat obscure atmosphere, which is reinforced by the harsh vocals. A few cuts reveal some EBM elements as well plus some surprising technoid sounds.

+ + + : “Siren” doesn’t exactly take me by surprise as the sound is not innovative at all, but it is a great and accomplished piece of work. I like the obscure ambience hanging over the songs. Cygnosic sounds like a sonic bridge between dark-electronics and EBM. The songs are danceable and always captivating through the high sounding tones. It sounds sharp and tormenting so in the end you get the most essential elements dark-electronic music has to feature. “Siren” is an album that will be pleasing to the fans of Cygnosic. The digipak/digibook format is a great artistic creation and strictly limited to 300 copies.

– – – : My single reproach about this album is the lack of diversity. All the songs are pretty similar and I sometimes got the impression that when you’ve heard one song, you’ve heard them all. A bit more diversity in the sound canvas would definitely have resulted in a brilliant opus.

Conclusion: Cygnosic progressively became a recognized and respected formation from the dark-electronic scene. “Siren” is maybe not the best work of the band although dark-electro heads are gonna like it for sure!