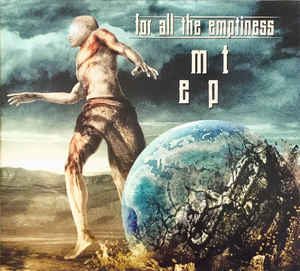 Background/Info: For all The Emptiness is a Toronto (Canada)-based formation, which have already self-released two albums. The band never spared any effort to improve different aspects of the production and now asked Seb Komor to produce this EP.

Content: The least I can say is that if you’re not familiar with this Canadian formation and if you like electro-pop you for sure are going to be really surprised. This is a mature and ultra professional production, masterly accomplished by the magical touch of Seb Komor.

But I think the band themselves deserve a special mention for the great songwriting. The choruses are often leading towards a truly climax while the vocals are absolutely charismatic. Some body-pop elements are empowering some passages. Both final cuts are simply exceptional revealing a great twist between melody lines, power and danceable vibes.

+ + + : “MT” is a kind of electro/future-pop revelation. The style and global sound approach aren’t new, but simply accomplished with knowledge. I guess that’s what we commonly define as ‘talent’! The sound treatments are impressive and especially the somewhat rawer melodic lead running through the final song. There also is an overwhelming lead running through “Hearts Against Minds”. The music is great, and the vocals are great as well.

Conclusion: For All The Emptiness is not reinventing the electro-pop standards, but they definitely bring music with a higher dimension. All aspects of the production reflect experience, knowledge and a great talent! Respect guys!

Best songs: “Hearts Against Minds”, “Stronger Than Before”, “Seduced By A Disease”.

Tags: For All The Emptiness