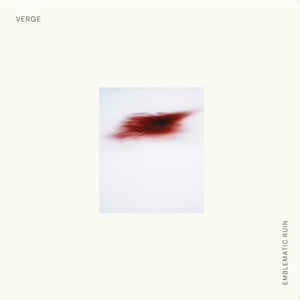 Background/Info: Verge is a solo-project set up by Irish producer Andre Gough. This work has been introduced as a 12” although it looks more like an album featuring 8 tracks.

Content: “Emblematic Ruin” takes off an ambient way. It rapidly evolves towards darker fields composed with raw sound treatments, resonating bass sounds and even cold, industrial elements. The tracks are carried by a slow cadence, which sometimes sounds like a heartbeat resonating through your throat. I noticed some wafting parts, which are into the purest ambient format.

+ + + : I didn’t exactly expect this type of work released on Avian although numerous releases reveal some experimentalism, but mainly mixed with techno elements. Verge will maybe evolve that way, but this work rather appears to be a visionary and refreshing dark-ambient format. The tracks have been composed with efficient sound treatments, which now and then reveal great technical skills of the artist. “Transient” and “Spleen” both excel in sound intelligence. The slow rhythm makes it all more accessible.

– – – : “Emblematic Ruin” is the kind of work I imagined to be released on another label. But it also reveals the open-minded vision of the label. It’s not the most accessible work, but I’m sure it will be pleasing to ambient lovers.

Conclusion: Verge has released a refreshing electro-ambient work, which sounds dark and composed with raw sound treatments. It has something avant-garde like I really appreciate.