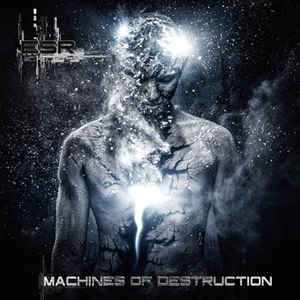 Background/Info: I found out that Vincent Pujol started to compose music under the Electro Synthetic Rebellion moniker in 1997. This new opus (the 7th one) has been released in 2017, which means a kind of 20th anniversary celebration featuring 11 new songs. This new opus comes after a hiatus of 4 years although ESR re-released both debut albums in the meantime.

Content: The EBM influences, which have been often compared to FLA haven’t really changed all over the years. ESR deals with a more sophisticated format of EBM. The new work is again characterized by an intelligent writing with some retro touch on top and the harsh vocals of Pujol. The haunting atmospheres makes it pretty dark, but always carried by a danceable cadence. One of the most noticeable cuts from the album is the pretty cool Leather Strip cover version of “Adrenaline Rush”.

+ + + : From a very personal point of view I consider ESR as a sure value from the EBM scene. The writing remains an elaborated and intelligent format, which is characterized by endless little noises and details, but also by alluring bass lines and haunting moods. “Machines Of Destruction” doesn’t sound that different from what I’m used to hear from this artist, but sound-wise it probably is one of his best releases.

– – – : I have one little regret when listening to ESR; it’s a great band, but without any real hits. The songs are absolutely accomplished, but missing this little extra that makes a song becoming a hit! The sound formula remains the same-old and that’s maybe an element ESR will have to think about on further releases.

Conclusion: “Machines Of Destruction” is without a shadow of a doubt one of my all time favorite ESR releases, but at the other side it brings nothing new. I would like to hear this project working with an extra member of producer to get some refreshing elements in the production.

Best songs: “Possession”, “Freedom Above All”, “Machines Of Destruction”, “In Your Eyes”, “Adrenaline Rush”.