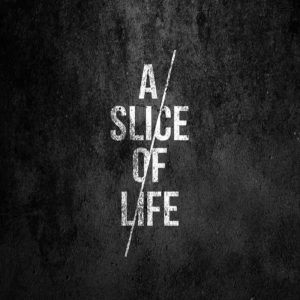 Background/Info: Set up by singer Dirk Vreys (obsCURE) and guitarist Guy Wilssens (Perverted By Language) A Slice Of Life was later on joined by 4 extra members becoming a real ‘band’. This self-titled debut-EP reveals 5 songs and is a teaser to the announced debut full length for 2018.

Content: A Slice Of Life clearly sounds inspired by some of the most famous new-wave formations from the 80s. The guitar parts might remind you of The Sisters Of Mercy, some of the darkest passages are awakening Joy Division memories and the vocals are sometimes evoking Robert Smith (The Cure). The dark and melancholic composition is accomplished by some electronic treatments and a flavor of dark-rock music on top.

+ + + : A Slice Of Life avoids any real form of innovation, but has accomplished a successful mix between 80s influences and an own rock-like touch. I like the dark atmospheres supporting this work while the typical new-wave guitar playing remains magic. The final song “Restless Gods” is my personal favorite one for being also the darkest cut and somewhat evoking the spirit of Joy Division.

– – – : Among the 5 cuts I just noticed only one poorly inspired track (cf. “Feel Like Crazy”). I’m convinced there’s much more potential hiding inside this formation than what they’ve shown at this self-titled debut. That’s why I’m eagerly awaiting for the album.

Conclusion: If you’re into 80s new-wave and related genres you really have to discover and keep an eye on this new formation. A Slice Of Life could be a next big surprise from Belgium!

Tags: A Slice Of Life