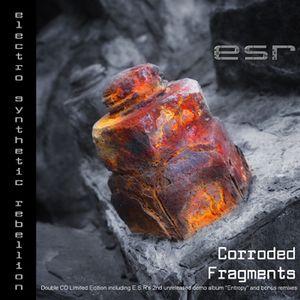 Background/Info: Electro Synthetic Rebellion became a rather familiar name for dark-minded EBM heads. The French one-man project set up by Vincent Pujol is active since the late 90s. The fans will for sure recognize the title of this album, which was originally released in 2003 on Wire Productions.

This double disc takes us back in time, which already happened at the previous work “Rebirth + Distorted Visions”. We now get back to the 2nd full length while the 1st disc entitled “Entropy” was originally composed in between both debut albums. The album was send to labels, but got never released so this is an opportunity to get back to the early and previously unreleased work of ESR.

Content: The influences and basics of ESR don’t really change all over the years. The sound and global production got more mature and elaborated, but the EBM founding remains exactly the same. The sound has been often linked to FLA and that’s precisely what comes through at “Entropy”. The songs were written in between 2000 and 2001, but they don’t sound like outdated.

“Entropy” is a solid piece of dark body music, which makes me think to a kind of spooky EBM. I like the haunting atmospheres in the back of the work while the dark and sometimes industrial sound treatments are efficient. Some of the vocals have been produced by robotic effects while there also are nice female backings at “Falling apart”.

The 2nd disc gets us back to the original songs from the “Corroded Fragments” albums, but we now get a different ‘bonus’ featuring 4 different remixes. It’s quite interesting to get back to this opus after “Entropy”. Speaking for myself I can’t understand why “Entropy” has been never released before as the songs are more accomplished than on “Corroded Fragments”.

Don’t get me wrong, it remains a cool production, which evokes once more influences from FLA and a typical 90s EBM format. It however is not the best album from ESR.

+ + + : Even if I often link the sound of ESR to FLA, this band has a great and recognizable dark EBM sound. “Entropy” is a remarkable work, which sounds like a lost treasure.

– – – : The “Corroded Fragments”-album is not my favorite work of ESR. There’s too much similarity between the songs and no real hits.

Conclusion: “Entropy” is a heavenly surprise that comes to life after more than 10 years of anonymity. It’s definitely an album you’ve to discover while you get the 2nd official album with it plus rare remixes.