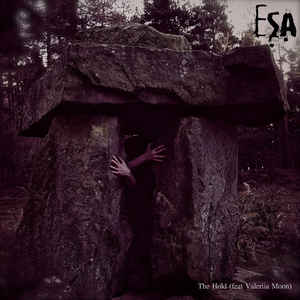 Background/Info: Jamie Blacker aka ESA (Electronic Substance Abuse) is now active for 15 years and has released many noticeable works on Hive Records (right in the beginning) and mainly on Tympanik Audio. He next joined hands together with WTII Records and has now signed to Negative Gain Productions. Female vocals were accomplished by Valeriia Moon while Ivan Popov played some cello and piano plus did some additional production.

Content: Right at the moment I thought to have already discovered the entire sonic spectrum of Jamie Blacker, this EP took me by surprise. The title song is a little sound jewel mixing elements of industrial- and tribal music while featuring the bewitching vocals of guest singer Valeriia Moon. The song has been meticulously built up, progressively reaching a truly sound orgasm.

The song has been remixes by iVardensphere and Tight Grip. The B-side song is much more than simply a filler. This track could have been the title song. It moves again into bombast and has been composed with icy sound treatments.

+ + + : “The Hold” is an impressive track mixing different influences with intelligence and efficiency. The female vocals add a touch of magic to the bombastic sound universe created by ESA. Both remixes are absolutely magnificent. Both remixes are more trance-minded and sounding like the perfect offspring between tribal-, industrial- and ethereal music.

“In Good Faith” is a hot dancefloor track for industrial souls. There’s no real B-side on this EP, which clearly sounds like a strong appetizer for the next ESA production(s).

– – – : This is the kind of record appealing for more! I don’t have any points to critique here!

Conclusion: I’m not saying that ESA has reinvented its own sound, but this EP sounds like a hard and sexy record appealing for more! Definitely one of the best EP’s I’ve heard this year!

Since you’re here … … we have a small favour to ask. More people are reading Side-Line Magazine than ever but advertising revenues across the media are falling fast. And unlike many news organisations, we haven’t put up a paywall – we want to keep our journalism as open as we can. So you can see why we need to ask for your help. Side-Line’s independent journalism takes a lot of time, money and hard work to produce. But we do it because we want to push the artists we like and who are equally fighting to survive. If everyone who reads our reporting, who likes it, helps fund it, our future would be much more secure. For as little as 5 US$, you can support Side-Line Magazine – and it only takes a minute. Thank you. The donations are safely powered by Paypal.
Tags: ESA, iVardensphere