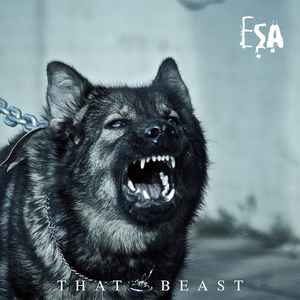 Background/Info: Jamie Blacker (still involved with iVardensphere) strikes back with his solo-project Electronic Substance Abuse (ESA). Set up in 2002 this harsh industrial project has released an impressive number of albums on different labels such as Hive Records, Tympanik Records, WTII Records and now Negative Gain Productions.

Content: ESA is a project I always have supported for its very unique approach in industrial music. “That Beast” moves a step further and feels like a laboratory experiment mixing rhythmic-noise and trance music. It’s harsh and merciless, but also constructed with terrific sound treatments and noticeable samplings. Several songs are featuring (guest) vocals, which are now cavernous-like and next rather sterile.

Notice by the iVardensphere mate Scott Fox contributed to one of the tracks.

+ + + : I’ve already heard several great works by ESA, but this new opus is without a shadow of a doubt my favorite. It has something visionary for the fusion of traditional rhythmic-noise together with pure trance passages. Some of the spoken samplings feel like accentuating the trance touch. But the most noticeable aspect of the work is there where most of the industrial artists are simply producing harsh sounds; Jamie Blacker manipulates and transforms them into a kind of high-tech industrial dimension. Just pay attention for “Then Follow Me” (feat. Scott Fox) and you’ll understand what I mean. This is an impressive sound production on, which power and outstanding sound treatments are joining hands.

– – – : I don’t see any major negative point about this album although I’m not a huge admirer of the front cover, which says more about the artwork than the music.

Conclusion: “That Beast” will take no prisoners, and leave the dancefloors filled with victims. This album is truly a masterpiece!

Since you’re here … … we have a small favour to ask. More people are reading Side-Line Magazine than ever but advertising revenues across the media are falling fast. And unlike many news organisations, we haven’t put up a paywall – we want to keep our journalism as open as we can. So you can see why we need to ask for your help. Side-Line’s independent journalism takes a lot of time, money and hard work to produce. But we do it because we want to push the artists we like and who are equally fighting to survive. If everyone who reads our reporting, who likes it, helps fund it, our future would be much more secure. For as little as 5 US$, you can support Side-Line Magazine – and it only takes a minute. Thank you. The donations are safely powered by Paypal.
Tags: ESA, iVardensphere