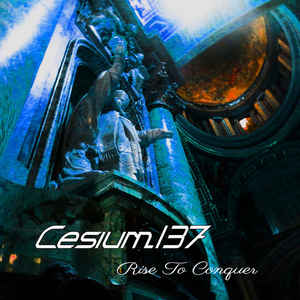 Background/Info: Twenty years after the set up of Cesium 137, Vince Guzzardo and Isaac Glendening have unleashed the seventh full length album of their common project. This new work appears after a hiatus of six years, the previous album being released in 2012.

Content: Cesium:137 always has combined elements of electro-pop and EBM. “Rise To Conquer” definitely sounds more into the electro-pop style. It’s a sweet- and delicate-like pop format carried by hopping rhythms and refined with some piano-like arrangements. The dance approach has been accentuated on a few tracks while other pieces are like the other way round and more into listening- and melancholic pop music. The vocals are rather sweet as well and in a way perfectly matching with the work.

+ + + : Cesium:137 has never really disappeared, but this album however sounds a bit like a comeback. That’s a damned good thing, but I didn’t exactly expect the American duo to strike back in their sweetest format ever. The album features a rather diversified canvas of electro-pop songs. I prefer the more danceable cuts and especially “Consequence” is a real attention grabber. You also will notice the maturity of the production emerging from the well-crafted and refined songs.

– – – : On some songs I’m missing a little bit more passion in the vocals’ production. Sound-wise I’m missing the EBM elements, which were part of this band in the past. As I already said this album is probably the ‘softest’ work they ever accomplished.

Conclusion: “Rise To Conquer” is a sweet and easy-listening piece of electro-pop, but according to me not exactly the album that will go down in history as a Cesium:137 masterpiece.