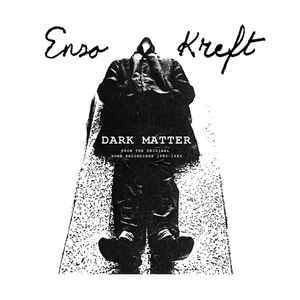 Background/Info: Eric Vandamme aka Enzo Kreft is a Belgian artist who was active during the first part of the 80s. He released 2 cassettes and in a way struck back in 2011 self-releasing a kind of CDR ‘best of’. “Dark Matter” brings the best of both cassettes (cf. “Me Is!” and “Cicatrice”) to life on vinyl format (for the very first time). This album features 10 songs that have been restored and remastered.

Content: The first songs are more into a kind of monotonous electro structures, which are pretty experimental. Quite progressively we get somewhat more elaborate yet still very minimal-like pieces. Enzo Kreft sounds pure 80s-like and the entire production reflects this gold-old icy and somewhat sterile composition, which simply was pure magic!

Next to the experimental input there also is a more elaborate approach, which for some of the synth sounds reminds me of The Neon Judgement and even a bit to Fad Gadget.

+ + + : Enzo Kreft is an artist that will probably not ring a bell, but who’s music has been risen from dust by Walhalla Records. There are some cool songs featured, which I’m sure will appeal for all 80s nostalgic music lovers. “Dark Matter” has this typical analog magic.

– – – : I think that a few songs could have been a little bit more elaborated, but back in time it definitely was another context and the lack of material was maybe one of the main reasons why you get the impression a few songs haven’t been accomplished.

Conclusion: Sometimes you simply have to awaken old and forgotten ghosts. Enzo Kreft is a nice discovery for 80s electro-underground lovers.