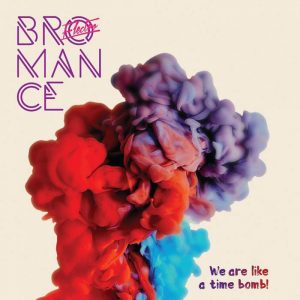 Background/Info: Electro Bromance is a Brazilian duo unleashing its debut full length. They previously released a self-titled and self-released EP. A few songs from the EP have been featured on the album as well.

Content: The opening cut reveals a solid techno-body sound mixed with some pop elements. Quite progressively the real source of inspiration emerges at the surface. Electro Bromance is dealing with electro-pop, which they mixed with other influences such as EBM and future-pop. You’ll also notice a few dance-pop cuts. The songs have been composed with electronics and guitar. I also have to mention the very efficient vocal parts. The singer’s timbre of voice sometimes reminds me of Robert Smith.

+ + + : This album is a nice surprise. It’s not that often we discover cool electro-pop from Brazil, but this album is worthy of examination. The opening song is something harder and somewhat into techno-body music, but it’s a phenomenal song. It sounds a bit like Syrian meeting Komor Kommando. The other cuts will appeal to nostalgic future-pop freaks. Electro Bromance feels comfortable experimenting with different influences, but in the end it all remains good underground-pop music. From danceable songs to other cuts supported with some melancholia to a kind of wave-pop music, this album is a real cool surprise.

– – – : I regret there’re no other songs than the opening cut in this harder techno-body style. But I have to admit Electro Bromance feels comfortable dealing with more familiar electro-pop fields as well.

Conclusion: Brazil and electro-pop music is not exactly a successful match, but Electro Bromance must be the exception to the rule. They’ve accomplished a sexy debut album featuring multiple great songs.