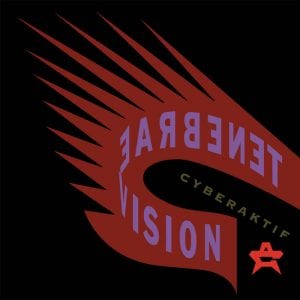 Background/Info: Can you imagine Bill Leeb (FLA) joining hands together with cEvin Key and Dwayne Goettel (both members of Skinny Puppy)? Well, that’s what happened in 1990 when those 3 Canadian EBM pioneers set up Cyberaktif. Two 12” (cf. “Nothing Stays” and “Temper”) got released in 1990 while the album “Tenebrae Vision” came next in 1991. All works got released on Wax Trax! Records, but unfortunately no other new production saw the light of day. Artoffact brings us back in time with this remastered version of “Tenebrae Vision” plus both maxi’s and a rare song on the bonus disc. Notice by the way that Blixa Bargeld (Einstürzende Neubauten) was featured on 2 songs.

Content: “Tenebrae Vision” reflects the true EBM spirit from the late 80s, but more than this it simply reveals the dark and typical Canadian EBM sound. And I here might affirm that Skinny Puppy and Frontline Assembly both were the pioneers and instigators of this specific ‘sound’, which is still inspiring bands today.

This album sounds dark and danceable. It reminds me more of FLA than Skinny Puppy. It also is an opportunity to rediscover some essential songs/hits such as “Nothing Stays” and “Temper”.

Both 12” (on the second disc) feature alternative edits and extra songs plus a remix of “Nothing Stays” by Beatbox Inc.

+ + + : This album is an essential EBM testimony from the late 80s – early 90s genre. As already mentioned it also brings two of the most legendary and praised Canadian bands together. You can hear it here consists of an ‘old’ release, but EBM die-hard fans will be pleased rediscovering this album and some of its greatest hits. This is where EBM comes from and those artists were the Canadian answer to European formations such as Front 242, Nitzer Ebb, DAF, Die Krupps and co.

– – – : “Tenebrae Vision” sounds a bit dated and that’s why I’m afraid it will probably not convince younger fans, which weren’t even born when the album came out.

Conclusion: Artoffact made a judicious choice re-releasing this great EBM opus. This is a part of the EBM history!