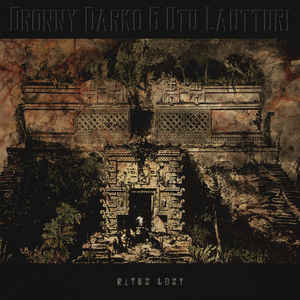 Background/Info: This album brings two artists together. Dronny Darko is a Ukrainian artist who released a rather impressive number of production over the past few years. You maybe know him from his work released on Cryo Chamber and the DNA Production (Russian Netlabel). Utu Lautturi is a Finnish artist who’s mainly mixing familiar dark-ambient influences with authentic instruments. “Rites Lost” features 3 tracks.

Content: “Rites Lost” reveals a sound emerging from the depths of the dark-ambient cellars. The work is characterized by extremely deep and humming sound radiations creating a nebulous atmosphere. A few intriguing noises or icy, lost bleeps suddenly emerge at the surface.

The work also reveals multiple field recordings and/or samplings. It all together sometimes ends in a kind of capharnaum. Another essential aspect is the kind of tribal percussion, which you’ll hear on both last cuts. It injects some dynamic to the work, which however remains overwhelmed by monstrous sound waves.

+ + + : There’s an interesting diversity in the featured elements running through this work. Just when you get the feeling that the composition is starting to stagnate you’ll notice an extra noise source like a slow tribal rhythm, mystic chants or a kind of intriguing bleeps. I also like the global progression in the songwriting.

– – – : Despite of the diversity and the slow progression of the tracks it sometimes becomes a little bit monotonous. The tracks are rather long in duration, which explains this monotonous feeling.

Conclusion: You don’t precisely know what kind of rites have been lost, but you’ll rapidly understand it rather appears to be a dangerous and somewhat forbidden kind of rites, which will be totally devoted to the power of your perverted imagination.