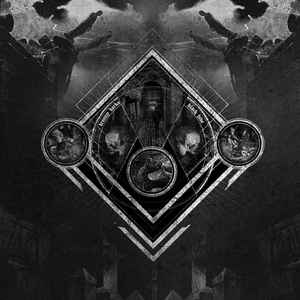 Background/Info: Oleg Puzan aka ‘Dronny Darko’ is one of those artists who never sleep. The Ukranian artist has released an impressive number of productions (including collaborations) during the past few years. “Black Hive” is the final chapter in a trilogy, which started with the album “Outer Tehom” (2014) and then “Spira Igneus” (2016).

Content: “Black Hive” is an appropriate title for the 8 cuts taking off with heavy, buzzing sound waves directly leading the listener into an imaginary world of horror. Dark, oppressive sound blasts join in while judicious field recordings only reinforce the visual strength of the composition. Dronny Darko likes to experiment with his different sound- and noise sources, which makes some passages more experimental.

+ + + : I’m often a bit skeptical about the work of prolific artists, but I’ve to admit “Black Hive” took me by surprise. It definitely is one of my favorite Dronny Darko releases thus far. The sound production is so overwhelming you can only be impressed by the composition- and production skills of the artist. He constructed monstrous sound blasts joined by a wide canvas of noises and field recordings. There’s a perfect osmosis between all ingredients making me affirm this album is a little jewel in this dark-ambient genre.

– – – : The opening cuts are absolutely brilliant and fascinating while the final part of the album is maybe missing a similar climax. So the best is right in the beginning and that’s maybe a pity although a very personal point of view.

Conclusion: Dronny Darko not only is a prolific musician, but he’s also getting better and better with each new work. I consider “Black Hive” as his ‘opus magnum’ so far!