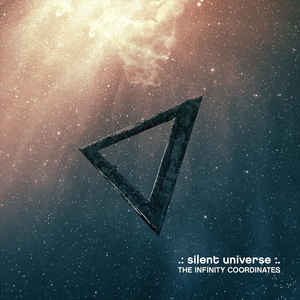 Background/Info: This Belarus project driven by Pavel Malyshkin (still involved in other projects such as Ugasanie, Polterngeist ao) joined hands with Cryo Chamber to unleash the third full length album of Silent Universe.

Content: The work features familiar dark-ambient ingredients, which are carried by long, dark sound waves. The tracks have been progressively built up revealing low, sound treatments and resonating, humming noises. The album features 5 cuts and the final song ends with an overwhelming apotheosis.

+ + + : The sound universe of “The Infinity Coordinates” makes me think to a spider web that has been patiently constructed. The progression of the composition is slowly evolving reaching a first climax at “Fractal Essence Of The Universe” and an absolute sonic orgasm at “In Cosmic Microwave Background”. The deep tones feel like announcing a nearby disaster while other passages reveal the obscure space-ambient approach of Silent Universe. There where Raison D’Être accomplished his composition with the famous monk chants and other sacred noises, Silent Universe deals with an astral dimension of dark-ambient music.

– – – : The tracks are pretty similar so I would have liked to get a bit more diversity.

Conclusion: Silent Universe has accomplished a misty and somewhat inhibited opus where you get the impression to get lost in a dark whole.