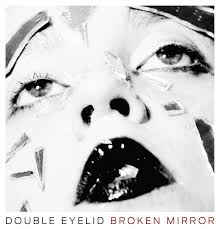 Background/Info: Double Eyelid is a Canadian band, which self-released their debut album “Seven Years” in 2014. They define their sound as ‘dark, theatrical electro-rock’. “Broken Mirror” is a kind of EP and/or album filled with remixes from songs that were mainly and originally released on their debut full length.

Content: There’s an interesting list of remixes featuring bands like Leather Strip, nTTx and Psyche as the most famous names, but still a few more less familiar names. The album is quite diversified with each artist trying to inject an own personal touch.

nTTx did a great job remixing “Woman Hanged” in a somewhat electro-bombastic style. Another noticeable cut is the remix of “Black Box” by Psyche, which is touched with a kind of icy sensuality. I also have to mention noticeable remixes by Leather Strip, Dead Red Velvet and Lanada.

+ + + : I’m not that much into productions featuring only remixes, but I have to admit that there are many cool remixes on “Broken Mirror”. It moves from EBM-minded cuts to icy, electro-pop songs to somewhat dance experiments.

– – – : This is the kind of release, which might give you a wrong perception about the original songs featured on “Seven Years”.

Conclusion: If you like Double Eyelid and you’re into remixes, “Broken Mirror” will definitely catch your attention. This is a rather classical, but interesting way to bring their debut album to life.