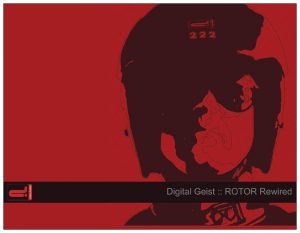 Background/Info: Alex Kourelis aka Digital Geist is an American artist I discovered by his “The Zero Engine”-album (2006). A few more productions have been released afterwards dealing with a progressive body-technoid sound. “ROTOR Rewired” is an ambitious project, which took 3 years to accomplish. It consists of a soundtrack that has been written for a sci-fi movie “Rotor” that was originally released in 1989. Digital Geist replaced the original soundtrack with his very own interpretation featuring 42 cuts.

Content: Alex Kourelis takes you away on  a trip of an hour and a half. You rapidly will recognize the soundtrack format, which is accentuated by numerous dialogues from the movie, but the music has been entirely written by Digital Geist.

It’s a varied piece of music, mixing many influences like the electro-techno style of the band together with buzzing sound blasts, groovy sequences, pure space-ambient atmospheres and numerous sound effects. Most of the tracks are rather short, but you also will discover more elaborate pieces. The very last song also is the only one with real vocals.

+ + + : The concept of “ROTOR Rewired” is damn crazy and very original. Digital Geist reveals great skills in composing soundtrack music, which totally fits with a sci-fi theme. There are several well-crafted tracks on this work, which confirm the electronic avant-garde approach of the musician. I like the way he brings different electronic styles together to get a fusion between EBM, techno and ambient. From deep and menacing bass lines to danceable grooves and metallic technoid sounds this album covers an impressive electronic canvas.

– – – : A soundtrack often is just a piece belonging to a wider entity. A movie is nothing without the music and that’s why you really have to discover the movie and the music available on Youtube to feel the real impact of this work.

Conclusion: “ROTOR Rewired” is a crazy original concept confirming the talent of this visionary band. I can’t say it’s the best work from Digital Geist, but definitely the most surprising one.

Since you’re here … … we have a small favour to ask. More people are reading Side-Line Magazine than ever but advertising revenues across the media are falling fast. And unlike many news organisations, we haven’t put up a paywall – we want to keep our journalism as open as we can. So you can see why we need to ask for your help. Side-Line’s independent journalism takes a lot of time, money and hard work to produce. But we do it because we want to push the artists we like and who are equally fighting to survive. If everyone who reads our reporting, who likes it, helps fund it, our future would be much more secure. For as little as 5 US$, you can support Side-Line Magazine – and it only takes a minute. Thank you. The donations are safely powered by Paypal.
Tags: Digital Geist, EBM