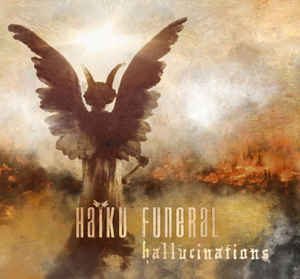 Background/Info: What would you expect from a band that saw the daylight on Halloween night? Nothing serious or a band inspired by haunting themes! It all happened in 2008 in a studio in Marseilles (France). The Haiku Funeral duo has released their fourth full length album, which is the second one on Aesthetic Death.

Content: “Hallucinations” is an appropriated title for an album that sounds like an invitation to join the tenebrous sound universe of this formation. The music brings different influences together, which in the end sound pretty doom-like. There for sure is a kind of dark metal-rock inspiration running through the songs, but it also sounds pretty industrial-like. The songs also reveal bombastic arrangements and psychedelic elements.

Haiku Funeral revisits different genres to finally create a unique sound characterized by overwhelming atmospheres. The vocals reinforced the obscure ambient content and are moving from screaming parts into a kind of deadly intonation.

+ + + : “Hallucinations” is hard to catch and impossible to define. That’s an essential aspect of this band making all the originality of the work. I can imagine a totally weird hybrid between Godflesh, The Swans and even Der Blutharsch, but in the end it’s just Haiku Funeral. I especially like the heavy ambient side of the work, which reaches a climax on “The Final Amphetamine Kiss” and “Razgradjone (Dissolution)” for its heavy industrial guitar playing. The sound of this band sounds like the title of the album: you don’t really know what to expect and simply embark for mysterious trip through unknown territories.

– – – : Speaking for myself I think this band has a strong potential in the composition of heavy doom-ambient pieces and industrial-rock-metal music. I would have liked to hear a complete work around these influences.

Conclusion: This “Hallucinations”-opus will show you imaginary images of evil forces. Haiku Funeral sounds a bit like touched by the hand of the devil and it sounds good!

Since you’re here … … we have a small favour to ask. More people are reading Side-Line Magazine than ever but advertising revenues across the media are falling fast. And unlike many news organisations, we haven’t put up a paywall – we want to keep our journalism as open as we can. So you can see why we need to ask for your help. Side-Line’s independent journalism takes a lot of time, money and hard work to produce. But we do it because we want to push the artists we like and who are equally fighting to survive. If everyone who reads our reporting, who likes it, helps fund it, our future would be much more secure. For as little as 5 US$, you can support Side-Line Magazine – and it only takes a minute. Thank you. The donations are safely powered by Paypal.
Tags: Godflesh, Haiku Funeral, Swans