Die Sektor launch crowdfunding campaign for 2 months of US touring 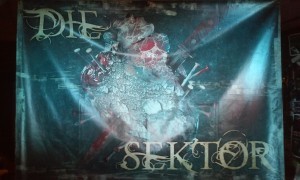 Atlanta-based dark electro act Die Sektor have launched a crowdfunding campaign for 2 months of US touring, announcing a selection of personal memorabilia, musical services and a 4CD retrospective “The Void Trilogy” exclusively on Indiegogo. The band is looking to raise US$6,000 to hit the road for 2 whole months from the start of October 2015 through to the end of November 2015. The band will be playing nearly every night in a different city – first as special guests of God Module and after that with Ego Likeness.

Says the band: “While of course we will have the opportunity to recover some of the costs involved by selling merch at concerts as we go along, we have first of all to design and manufacture all that merchandise – and then to actually physically get from show to show and pay for somewhere to stay each night we’ll be on the road for. All of that has to be paid for in advance – and when we sat down and added it all up, its quite a frightening sum.”

The 4CD retrospective “The Void Trilogy” will hold a re-pressing of all 3 “Void Trilogy” albums, each disc with previously unreleased bonus content (and each disc with alternate artwork). It comes in extra-wide DVD-box format to accommodate a 20-page full-color 180x120mm booklet with all art and lyrics to all 3 albums. You also get the “From Out Of The Void” as bonus CD. This will be the only physical pressing of “From Out Of The Void”.

To get a copy of the hand-numbered limited edition of 100, check the band’s Indiegogo campaign where you’ll find a lot more perks. The campaign runs through to Halloween, with CD/digital perks being delivered end-of-September and everything else at the tour’s end.

Here’s the ‘pitch video’ for the campaign can be seen here: