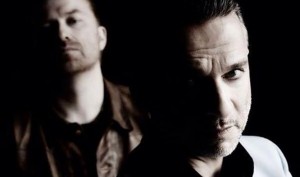 Out on October 23 is “Angels & Ghosts”, yet another collaboration between Dave Gahan (Depeche Mode) and Soulsavers under the Dave Gahan & Soulsavers moniker. A first song and video (not for epilepsy and migraine sufferers), “All Of This And Nothing”, can be viewed below. It’s the second time that Gahan has been collaborating with the Soulsavers (the English production and remix team composed of Rich Machin and Ian Glover) after 2012’s “The Light the Dead See” album.

The album will be released as digital download, as well as physical CD and vinyl worldwide through Columbia. In support of the album, a tour will follow with six shows played in the US and Europe in late October and early November.

Since you’re here … … we have a small favour to ask. More people are reading Side-Line Magazine than ever but advertising revenues across the media are falling fast. And unlike many news organisations, we haven’t put up a paywall – we want to keep our journalism as open as we can. So you can see why we need to ask for your help. Side-Line’s independent journalism takes a lot of time, money and hard work to produce. But we do it because we want to push the artists we like and who are equally fighting to survive. If everyone who reads our reporting, who likes it, helps fund it, our future would be much more secure. For as little as 5 US$, you can support Side-Line Magazine – and it only takes a minute. Thank you. The donations are safely powered by Paypal.
Tags: Dave Gahan, Depeche Mode, Soulsavers