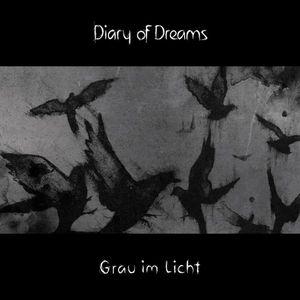 Content: For more than 20 years Diary Of Dreams has been involved in a rather unique genre, which is somewhere in between gothic and electro-wave music.

It’s maybe a coincidence (or not), but the 12th studio album of the band also reveals 12 new songs. The style and influences on “Grau Im Licht” are not that different from the ‘familiar’ sound of the band. There again is this perfect match between refined electro arrangements, delicate piano passages and harder guitar riffs. Adrian Hates typical and somewhat growling timbre of voice reinforce the nostalgic pieces with a dark taste.

The darkness or shall I call it the nihilistic vision of the work directly comes through on the poignant “Sinferno”. This song opens with a hard and inferno-like sonic outburst, which progressively moves into epic passages and harsh industrial sound treatments. The opening piece is not exactly meant as an intro, but rather sounds as a heavy composition.

We next get into the familiar sound of Diary Of Dreams, which is delivered with this typical and enlightening part of drama. That’s probably why I often associated Diary Of Dreams with gothic music, but in the end they always reveal to be different and especially for their more open-minded and eclectic approach. “Grau Im Licht” constantly moves in between heavy passages reinforced by epic arrangements and guitar riffs on one side and this delicate part filled with beautiful melancholia on the other side.

Both elements can be assembled as well, which results in an overwhelming piece like “Die My Phobia”. Musically this song also reveals a great diversity in sounds and a well-crafted twist between hard, crashing sounds reinforced by epic passages and pure delicacy illuminated by little bleeping treatments. Diary Of Dreams has this power to elevate some of their songs towards a kind of dark-reverie. “Grau Im Licht” and “SinnFlut” both are like a beautiful testimony in the genre.

But the best part of the album is yet to come. “HomeSick” is a particular song as it’s sung in English (Adrian Hates mainly singing in German), but it especially reveals an artistic beauty confirming that darkness and dark lyrical themes can be the most inspiring ones for an artistic creation. “Schuldig!” coming up next is a similar song revealing the great writing skills of those experienced veterans.

The album finally comes to its apogee with a few more wafting cuts, but especially the final song “Schwarz” is one more noticeable song for its somewhat cinematographic appeal.

Conclusion: “Grau Im Licht” is a fully accomplished piece of music revealing a mature and professional approach. This is without a shadow of a doubt an album that will fully convince the wide fanbase of the band, but I can’t get away from the notion that it’s not their most inspiring work to date.