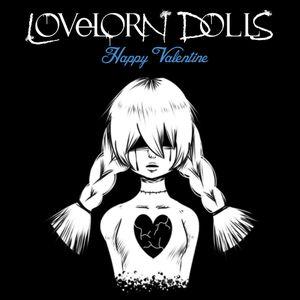 Content: The Belgian goth-rock formation Lovelorn Dolls last year released a successful 2nd full length entitled “ Japanese Robot Invasion”. The songs “The Thrill” and “Happy Valentine” both are some of the finest and most successful cuts of this album so it’s not really a surprise that both songs have been released as EP- title songs as well.

“The Original Version” stands for a delicate and poignant goth-rock composition, which is into beauty and melancholia instead of power. The “so-called “Ghost Piano Version by Kristell Lowagie & Maja Marcucci” is even more into melancholia and reverie. As the title clearly indicates, this is a piano written version accompanied by some extra sound layers. It’s an intimate and beautiful version.

Remixes were accomplished by Maxx, member of Helalyn Flowers and producer of Lovelorn Dolls, Jean-Marc Lederman (The Weathermen, Ghost & Writer), Simon Carter and the less familiar Restriction 9. The “Euromance Mix by Helalyn Flowers” is more into electronics and is a real successful adaptation of the original version. Simon Carter adapted the song into a club-minded version, which will be cherished by DJ’s. I expected a bit more out of the other remixes and especially more from the one by Jean-Marc Lederman.

The rest of the EP features 7 live versions of songs that were recorded during the legendary, but miserable 2015 edition of “Eurorock”-festival in Belgium. The songs were taken from both debut albums. I can’t get away from the idea that these live songs have been a way to illustrate the power of this band on stage, but the recording of the songs sounds a bit amateur. It all sounds a bit demo-like this way although it might please to the fans of Lovelorn Dolls.

You here will get a live version of the title song plus a few more cuts like “The Thrill”, “Japanese Robot Invasion” ao.

Conclusion: This clearly is an EP with 2 different parts; I like the “Happy Valentine” chapter, but the live songs leave me a bit disappointed.

Since you’re here … … we have a small favour to ask. More people are reading Side-Line Magazine than ever but advertising revenues across the media are falling fast. And unlike many news organisations, we haven’t put up a paywall – we want to keep our journalism as open as we can. So you can see why we need to ask for your help. Side-Line’s independent journalism takes a lot of time, money and hard work to produce. But we do it because we want to push the artists we like and who are equally fighting to survive. If everyone who reads our reporting, who likes it, helps fund it, our future would be much more secure. For as little as 5 US$, you can support Side-Line Magazine – and it only takes a minute. Thank you. The donations are safely powered by Paypal.
Tags: Lovelorn Dolls