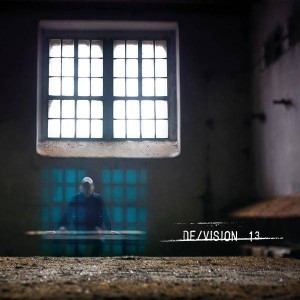 Background/Info: De/Vision is back on track. This is the first studio album since “Rocket + Swords” (2012) so I was wondering how Steffen Keth and Thomas Adam have accomplished their new opus. The successful story of the German masters of synth-pop saw the light of day in the late 80s while the band became an uncontestable leading electro-pop formation during the 90s.

Content: De/Vision remains faithful to their melancholic moods and melodic choruses. “13” reflects all the required elements to achieve a great synth-pop release. I can’t say that there’s a new noticeable element running through “13” although the global sound treatments became rawer and heavier blasting. There still is a link with Depeche Mode, but the great opening cut “Who Am I” reveals the heavier arrangements and production. De/Vision has been hit by an industrial ogre and that’s a damned good thing as the sound features great sonic manipulations. The debut is absolutely amazing.

Quite progressively the duo moves back towards familiar paths, which are 100% De/Vision-minded. The production reflects all the intelligence and genius of this band. The songs feature great effects and the typical moody passages. This is not exactly the kind of composition that has been made in a hurry. You’ll notice the great progression of the song structures, which in the end is once again driven by rawer sound treatments.

+ + + : “13” is not exactly innovating although reveals certain rough sonic manipulations. The songs however never turned into a kind of industrial-pop, but simply remain characterized by this familiar and brilliant spirit this band has composed through the years. This work again reveals a sacred match between music and vocals.

– – – : I’m not that fond of the few ‘sweet-honey’-like passages (cf. “Prisoner”), which I can imagine as a live song where the audience will put their hands in the air while holding on to their lighter.

Conclusion: De/Vision clearly took their time to accomplish one more noticeable release. It all becomes clear now that age has no real impact on their creativity while the talent is only increasing.