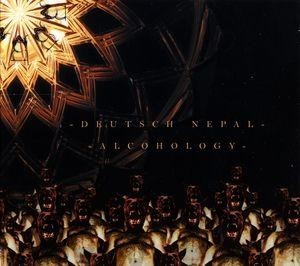 Background/Info: Peter Andersson better known as ‘Lina Baby Doll’ is one of the main artists active in the contemporary industrial music scene. Involved in multiple projects his main band remains Deutsch Nepal. The band was rather prolific during the 90s and the golden years of Cold Meat Industry while Deutsch Nepal became more discrete since the millennium.

This is the first studio album in 4 years and only the 2nd one since the last album on CMI. “Alcohology” has been released on the band’s own label Entartete Musikk.

Content: Lina Baby Doll has been often linked with alcohol. This album clearly appears to be an exorcism of this dangerous addiction and even a courageous testimony of the artist about the danger and consequences of alcohol.

But the least I can say is that this work also became a great sonic therapy! “Alcohology” reveals an artist getting back to the roots of industrial music while accomplishing his composition by numerous, shouting vocal parts and electronic arrangements. “Alcohology” sounds like a sonic bridge between early industrial music and modernism. The industrial influences are quite heavy and bombastic while a few passages with drones and epic arrangements make it all more powerful. The tracks feature dense and poignant cold-ambient atmospheres.

The sound of Deutsch Nepal has been often hard to grasp, but has always remained dark and industrial. This new opus is not exactly evolving in the influences of the artist, but appears to be more styled and less ‘anarchistic’ than some earlier work.

+ + + : Deutsch Nepal holds on early industrial influences, which are simply essential to remind you of the real power and style of ‘industrial music’. This work reveals a great fusion between industrial and ambient music.

Conclusion: An old industrial veteran simply showing the industrial scene what it means to compose the ‘original’ industrial sound. “Alcohology” is a fascinating sonic exorcism of the person behind the artist old demons… Simply brilliant!