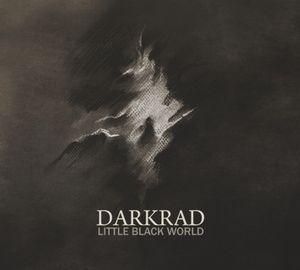 Content: Jana Komaritsa, better known under her artist name JanaDark is one of the few female artists dealing with dark-ambient music. This Russian born musician released a debut album (cf. “Abnormal Love”) on the now gone Cold Meat Industry label, and a self-released tape as a successor (cf. “Little Black World”) in 2014.

Audiophob often has a nose for talented artists and picked up Darkrad to re-release the sold-out tape as a CD format with some extra tracks. It will be an opportunity to (re)discover this project, but the CD-issue of “Little Back World” is also a must have for all of those who already know the cassette as they’ll get 7 bonus cuts.

“Little Black World” takes off with ghost-like voices floating in a dark, humming and somewhat misty sound universe. A dense, dark atmosphere hangs over the composition, which makes it all a bit mysterious. It feels a bit like exploring an unknown cavern filled with dangerous secrets which can emerge to the surface at every moment. JanaDark creates a paranoiac sonic platform with a strong visual appeal. Deep vibrating loops and the ghost-like voices are constantly coming back to terrorize the listener.

This album clearly reveals a scary touch created by the multiple sound manipulations and different effects. The opening part will take you by surprise and finally bring you to a climax on “Someone Beneath” and “Ocean Beckons”. Darkrad definitely sounds like music for evil spirits! But when you think to have reached the ultimate point of anger, the album moves a step further, pushing the level of angst to its most extreme point. “All Is Wrong” is the darkest track on the list and is animated by deep vibes and monstrous sound treatments. The least I can say is that the ‘original’ album featuring 8 cuts is a well-crafted and freaky composition.

The bonus part reveals 5 extra cuts plus 2 remixes. I get the impression that those cuts are much more than simple album fillers, but visionary pieces revealing new evil inspiration. The sound become really disturbing on “Die In Eclipse” where Jana Komaritsa reveals herself as a sonic witch.

Dirk Geiger and Spherical Disrupted were asked to create remixes and I mainly recommend the blasting and echoing sound treatments of Dirk Geiger remixing “Feel The Blood”.

Conclusion: I think it would have been a pity to imagine “Little Black World” been reduced to a strictly limited and already sold out tape format. This album deserves this re-issue featuring some extra poignant tracks.

Since you’re here … … we have a small favour to ask. More people are reading Side-Line Magazine than ever but advertising revenues across the media are falling fast. And unlike many news organisations, we haven’t put up a paywall – we want to keep our journalism as open as we can. So you can see why we need to ask for your help. Side-Line’s independent journalism takes a lot of time, money and hard work to produce. But we do it because we want to push the artists we like and who are equally fighting to survive. If everyone who reads our reporting, who likes it, helps fund it, our future would be much more secure. For as little as 5 US$, you can support Side-Line Magazine – and it only takes a minute. Thank you. The donations are safely powered by Paypal.
Tags: Darkrad