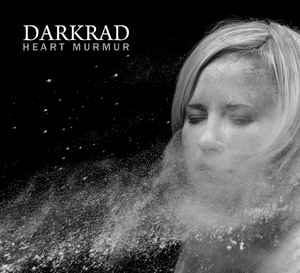 Background/Info: Russian artist Jana Komaritsa is based in the USA and has been involved with many projects dealing with music. She’s also member of Tanzfront Project, is active as a DJ, runs the label Mrakmur and is promoting the Russian underground scene. After a debut album (cf. Abnormal Love”) released in 2012 on the now defunct Cold Meat Industry and the album “Little Black World” (2014) released on her own label Mrakmur as cassette format and on Audiophob as CD, she now joined hands with Audiophob to unleash her newest opus.

Content: “Heart Murmur” is a work revealing an impressive arsenal of influences. It makes me think to a carousel of sounds and noises, which have been now assembled into an experimental creation and next becoming pretty ambient-like. There’s a constant anguishing sphere recovering the work, which finds its apotheosis on the very last songs of the album, which are bonus cuts.

Indeed, next to the 9 tracks you get 6 bonus tracks featuring among others previously released cassette pieces and remixes by Flint Glass and Mortaja.

+ + + : This work is diversified and eclectic. It feels like there are different parts running through the work. We all have to make our mind, but I personally prefer the overwhelming, haunting cuts. It’s a cold and bewitched side of the album, which don’t get you feel comfortable. It might create a paranoiac reaction, getting the impression an invisible presence is watching you. The sensation is only accentuated by some rare, manipulated ghost-voices. Resonating sounds and slow rhythms are accentuating the global feeling of fright. The bonus part of this work is the greatest one.

– – – : I can’t say to have been totally convinced by the ‘new’ songs of the album. Some of them are maybe too cinematographic-like, creating a contrast with the heavier bonus cuts.

Conclusion: This is an album with multiple influences and 2 distinguished ‘faces’. There’s a more dark-dreamy side, which I think is the less interesting one and a great and overwhelming one on the industrial side.