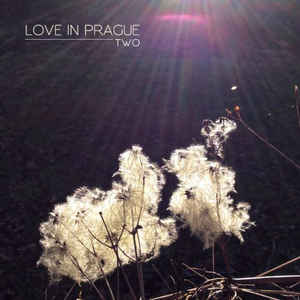 Background/Info: Benoît Gerard and Chloé Praha have been active under the Love In Prague moniker since 2007. The first album “Ghost Note” was released in 2013 on Kalinkaland Records. Two years later they struck back with “Fallen Angels” released on Unknown Pleasures Records and for their newest work “Two” (which is the third album) they joined hands together with Off World Music.

Content: If you’re familiar with the melancholic sound of the French duo this new opus will have fewer surprises. They seemed to go on where they left off. “Two” is made of sonic reverie, a dark and imaginary universe dominated by sorrow and melancholia. These feelings have been perfectly transposed into music and accentuated by the singer’s vocals. The low bass playing of Chloé only accentuates the state of despair.

+ + + : If you’re into melancholia and simply love dark music, this is an album you are going to like. Love In Prague has this 80s nostalgia they’ve merged with a more personal approach. The guitar parts however remain the main characteristic of the album and are bringing the 80s spirit back to life. The artwork of the album (which is a digipak) fits with the sadness of the music. Some passages of the album reveal an elevating sensation while I personally also enjoyed the fine electronic treatments running through “Black Sheep”.

– – – : This is an album you are really going to like or one that will leave you unmoved. The songs can become a little monotonous because of the repeating sound formula. There’s less diversity between the songs and between the different releases.

Conclusion: “Two” is an ode to melancholy, which is just missing a climax to speak about a fully successful release. I personally expected a bit more from this new opus.

Since you’re here … … we have a small favour to ask. More people are reading Side-Line Magazine than ever but advertising revenues across the media are falling fast. And unlike many news organisations, we haven’t put up a paywall – we want to keep our journalism as open as we can. So you can see why we need to ask for your help. Side-Line’s independent journalism takes a lot of time, money and hard work to produce. But we do it because we want to push the artists we like and who are equally fighting to survive. If everyone who reads our reporting, who likes it, helps fund it, our future would be much more secure. For as little as 5 US$, you can support Side-Line Magazine – and it only takes a minute. Thank you. The donations are safely powered by Paypal.
Tags: Love In Prague