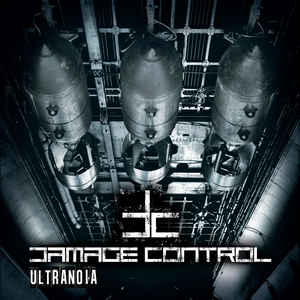 Background/Info: “Ultranoia” is the debut album of Damage Control. Set up by Australian artists Bill Barsby and Damian Davis plus Markus App (Germany) and Jason Podmore (UK), we might speak about an international collective. The album got mixed and mastered by Chris Peterson (FLA, Will, Noise Unit, Öhm, Decree ao).

Content: Damage Control sounds inspired by EBM. It’s not the hard-core EBM approach, but an intelligent and sophisticated composition, which might remind you of bands such as In Strict Confidence, Skinny Puppy and Portion Control. There’s a real fascinating mix, which is maybe due to the different origins of the band members.

“Ultranoia” is mixing danceable- and powerful cuts together with more evasive and somewhat soundtrack-orientated songs. The vocals are passionate and in total harmony with the dark sound creation.

The final song is a remix by Leather Strip.

+ + + : Damage Control didn’t spare any effort to accomplish a real masterpiece. The songs are intelligent and well-crafted, but still revealing a mature and outstanding production. The mixing of Chris Peterson is for an important aspect here. The songs mix power and a great sound creation plus appropriated vocals. But “Ultranoia” is not only a technically outstanding album, but also feature many terrific songs. The sound of Damage Control also inspired Claus Larsen who made a great remix of “Hate Crime”.

– – – : I don’t see any negative point! “Ultranoia” is maybe not the most accessible EBM format, but EBM is much more than simple 4×4 structures!

Conclusion: Damage Control took me by surprise. This band has accomplished a         real masterpiece, which will be for sure become one of my favorite EBM albums of 2017. Respect guys!

Since you’re here … … we have a small favour to ask. More people are reading Side-Line Magazine than ever but advertising revenues across the media are falling fast. And unlike many news organisations, we haven’t put up a paywall – we want to keep our journalism as open as we can. So you can see why we need to ask for your help. Side-Line’s independent journalism takes a lot of time, money and hard work to produce. But we do it because we want to push the artists we like and who are equally fighting to survive. If everyone who reads our reporting, who likes it, helps fund it, our future would be much more secure. For as little as 5 US$, you can support Side-Line Magazine – and it only takes a minute. Thank you. The donations are safely powered by Paypal.
Tags: Damage Control, EBM