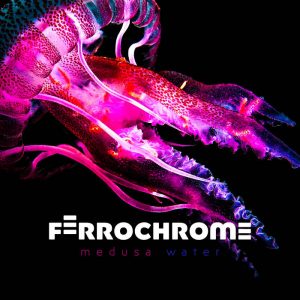 If you’re already familiar with Aidan Casserly you for sure know his unique timbre of voice. This is the kind of singer who you’ll directly recognize once you’ve heard a song on that he is singing.

+ + + : Sound-wise Dirk Krause took me by surprise. He remains a talented musician who transposed himself into a visionary electro-pop composer. Forget the familiar synth-pop standards and get ready to discover an experimental pop style carried by evasive passages, multiple sound effects, exotic vibes (cf. “Medusawater”) and retro-influences. Aidan Casserly is a singer you gone like or not, but one thing is for sure; this man has a unique timbre of voice!

– – – : I’m not always convinced by the harmony between some of the songs and the vocals, but that’s maybe due to the album’s diversity. The work sometimes feels a bit like a sonic exorcism of multiple ideas instead of a homogenous composition. I really like some of the songs while others left me skeptical.

Conclusion: Meshwork Music wants to be home for ‘advanced’ electronics and that’s for sure what Ferrochrome deals with. This is a unique electro-pop band, maybe revealing the pop music of the future and distant generation.

Best songs: “Fighters In A Cage”, “Welcome The Night”, “One Million Cries”, “The City”.