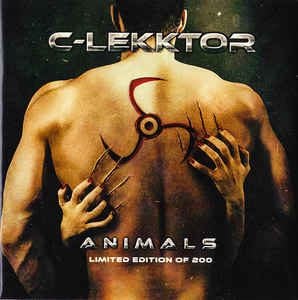 Background/Info: Mexican dark-electro sensation C-Lekktor delivers a new EP featuring the title-song taken from the last album “Out Of My Way” plus 2 remixes of this song and 1 previously unreleased B-side song. The CD-format is limited to 200 copies.

Content: “Animals” wasn’t my personal favorite track from the last album although it’s a solid piece of music and totally appropriated to get released as EP title song. It’s a powerful dark-electronic piece with some rave-industrial flavor reminding Noisuf-X on top. We next get a “Club Version” of the song and a remix by Stoppenberg (aka Jan Loamfield from Noisuf-X, X-Fusion).

The other song left (cf. “Cyborgs”) is much more than simply a B-side cut, but a real(8). hard and hitting rave-industrial cut, which here again reminds to Noisuf-X.

+ + + : What I like in the C-Lekktor sound is the powerful sound! It’s a dark-electronic format mixing certain ‘Mexican sound’ together with refreshing and technoid elements. “Cyborgs” stands for raw industrial-rave music while “Animals” is mixing similar elements with a more classical dark-electro sound. The Stoppenberg remix is a cool little bonus for the DJ’s.

– – – : Speaking for myself I prefer the B-side cut instead of the title-track, but I think that’s not really a minus point.

Conclusion: “Animals” reveals C-Lekktor at its best and simply confirms this band surely became one of the best exponents in its music genre.