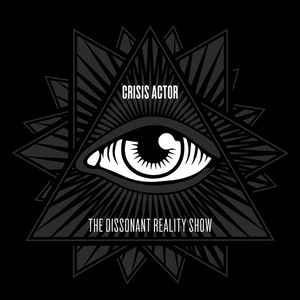 Background/Info: Crisis Actor (new project of David Thrussell joined by Tony D’Oporto) earlier this year released the successful debut album “Slave New World”. The title song of this EP was originally released on the album and 3 other songs were taken as well,  and all remixed.

Content: “Slave New World” was a fascinating album revealing a high-tech electro-minimalism mixed with intelligent EBM influences. This EP remains pretty minimal, but reveals a down-tempo approach, which sometimes moves towards dubby fields. The songs that were chosen, except “Electronic Eye”, also were some of the quietest ones from the album, which might explain the rather down-tempo approach.

Except one “Extended Remix” of the title song by Crisis Actor, the other cuts have been remixed by D-Echo Project, Xspanse, Displacer,  Tripswitch, Dead Voices On Air, Iszoloscope and Solid State. The remix of “Electronic Eye” by Iszoloscope is the single cut with a real clubby approach.

+ + + : I already liked the “Slave New World”-album and this remixes-EP is an interesting addition to the original versions. The remixers did a real great job and the original minimalism of the songs mixed with down-tempo elements sound like a perfect match. There also is a kind of space dimension emerging from the tracks, which get it a bit ambient-like as well. “Electronic Eye” remains one of my favorite songs and the remixes by Dead Voices On Air and Iszoloscope are simply great pieces of music. The spooky vocal parts are pretty cool as well and add a mysterious flavor to the song.

– – – : I can’t say that I was disappointed by one of the tracks/remixes although the remixes of the title song are the less convincing ones.

Conclusion: If you already enjoyed the album, you for sure gone like this somewhat different side of Crisis Actor created by inspired remixers.