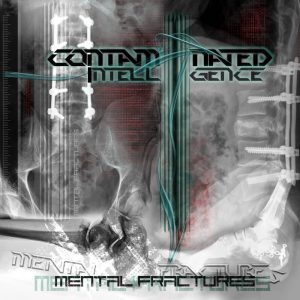 Background/Info:  A few months ago now Mental Fractures released the EP “Status Control”. This album features the songs from the self-released EP “Mental Fractures” (2014) plus 5 extra cuts. Driven by Jourdan Turner and Rick Mitchell this American duo claims to be inspired by different genres and bands. This album was already released a few months ago and in the meantime Contaminated Intelligence has already released new work.

Content: The least I can say is that this album is not an emulation of another band. Contaminated Intelligence is mixing different influences, which resulted in an impressive sonic canvas, which however remains mainly instrumental and cinematographic like.

The songs are bombastic, but also revealing a sophisticated approach with subtle sound treatments. Some passages are a bit vintage-like, mixing dark-electronics together with industrial sounds. And that’s especially true for the few sung cuts, which sound like revealing another band.

+ + + : “Mental Fractures” is a well-crafted and modern-minded work for the cinematographic approach. It has something refreshing and somewhat visionary. The ambient side made of cool sound treatments and the bombast running through this work is pretty complementary. “Mental Fractures” is an album you’ve to listen to a few time before you really can get into it. Then you can realize the elaboration of some tracks and the global sophistication of the production.

– – – : I think it’s not that evident to have an album with 2 clearly, different sides and especially when they’re so different.

Conclusion: This work has something schizophrenic, like two split entities coming together on the same album. But there’s something to say about both sides although it remains a ‘difficult’ album.