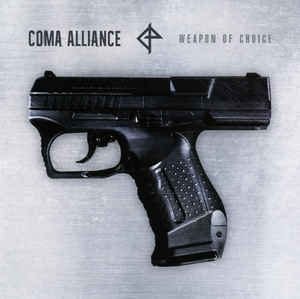 Background/Info: Coma Alliance resulted from the common efforts between Adrian Hates (Diary Of Dreams and Accession Records owner) and Torben Wendt (Diorama). I think we can say that both musicians share a common music interest, which already resulted in 2016 in a first joint tour with mutual guest appearances. “Weapon Of Choice” goes a step further delivering the first album from both artists.

Content: Adrian Hates’ unique timbre of voice clearly brings us back to Diary Of Dreams while the arrangements and sound some treatments from Torben Wendt reminds Diorama songs. So in the end this album becomes a kind of fusion between two artists and their respective bands. Notice by the Zura Nakamura (Diorama) played the guitar on this album as well. Bombast and refinement have been merged together. You’ll find a similar fusion between electronics and guitar. The songs reflect melancholia, but still this sweet and somewhat anguishing reverie, which feels a bit like a muse for both artists.

+ + + : If you like Diary Of Dreams you probably also like Diorama so imagine getting the main protagonists together and you gone like Coma Alliance. The album reflects a dark and dreamy side. Heavy sound treatments and subtle arrangements feel a bit like a sonic Yin and Yang. You can feel the songs progressively growing on you till reaching an ultimate point of ecstasy.

– – – : The sound formula doesn’t really sound innovative and the sound formula even becomes a little bit repetitive after a while. It doesn’t take a way there a few cool songs featured at the album, but I can’t give you one potential hit.

Conclusion: Coma Alliance is a project that had to see the daylight; I think it was written in the stars and their “Weapon Of Choice” will for sure find multiple adherents. If you like dark and dreamy song this album will bring you enjoyment.