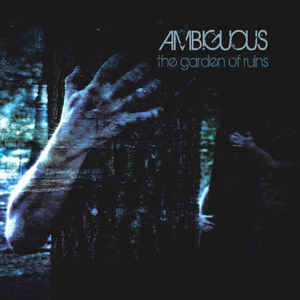 Background/Info: Igor ‘Ish’ Senigla is mainly known for his involvement as ISH. You might have discovered this IDM-minded project on Aliens Production too. The Czech artist is now back on track under the Ambiguous moniker. This is the first official album by Ambiguous while a few self-released productions were already released in 2008 and 2009.

Content: “The Garden Of Ruins” is a somewhat prophetic title for the kind of sound you’ll hear. Ambiguous deals with a dark fusion of ambient, industrial, drones and cinematographic music. The tracks are diversified, sometimes accomplished with Gregorian-like chants while I also noticed angelic, female vocals emerging at the surface on one song.

+ + +: This is a rather surprising release on Aliens Production. Dark-ambient music is not exactly what I’m used to hearing on this label, but Ambiguous is much more than simply dark-ambient. There’s a mix of influences, especially the intelligence of the writing process is worthy of examination. From the hard, echoing drones to the sophisticated ambient passages, this work had a great impact on me. It has an overwhelming power with a strong visual content. I’ve been always a lover of Gregorian chants and other female vocals/choirs, which is an element this production is also dealing with.

– – – : The second part of the album is a little bit repetitive and less creative.

Conclusion: Ambiguous sounds like the work of a dark sonic demon who brings us a poignant impression from his secret cave.