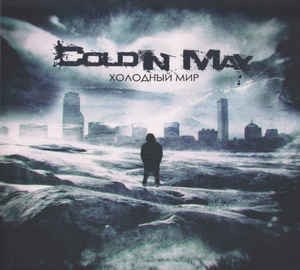 Background/Info: Hailing from Belarus, Cold In May has already released 2 previous albums and a few EP’s. The 4 head band released their 3rd full length “Холодный Мир” (translated as “The Cold World”) a few months ago.

Content: “The Cold War” is a typical pop inspired release with a poignant and omnipresent sad mood hanging over the songs. One of the main particularities of the songs is that they’re all sung in Russian.

The music reveals a quite noticeable electro-rock orientation, the songs clearly empowered by guitar while the electronic passages inject a delicious, but sad taste of melancholia. A few songs have been reinforced by cool melodic tunes, which polished the pop element.

+ + + : Cold In May definitely not sound like an average electro-pop formation although they’re using familiar elements. There’s a perfect balance between guitar and electronics and I especially like the beautiful melancholic passages adding this sensitive and fragile touch to the work. The digipak format of the album is a real bonus.

– – – : The language is not exactly the best way to catch the attention of an international audience. This album is also missing a potential hit!

Conclusion: “The Cold War” sounds like an album mainly created for the Russian scene. If you like sad sounding pop music you definitely have to listen to Cold In May’s new album.

Best songs: “Morning In The Cities Of Dust”, “Lies”.

Tags: Cold In May