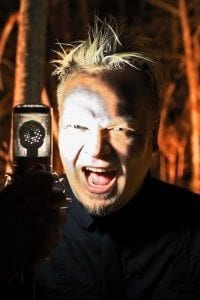 nTTx is a Canadian solo-project set up by Gord Clement. This artist got previously involved as singer into the promising Atomzero. nTTx reveals similar, but more personal body-pop influences. I first discovered nTTx through a few successful remixes for bands like Stars Crusaders, Comasoft, Advance and more recently for Double Eyelid. After the “Falls Beautiful”-single featuring a cover version of Depeche Mode, nTTx is now back on track unleashing the “Objective”-EP on WTII Records.

Q: What made you leave Atomzero and starting the solo-project nTTx?

Gord: Some differences with Peter and I that we let go on. We were a good team in many ways, but in others, not so much.

Q: What kind of sound did you have in mind when you started nTTx and what does it say about potential sources of inspiration?

Gord: I wanted to get to a more raw sound, less instruments going on, with elements of my favorite genres in an electronic stew.

Q: You seem to like cover versions. You of course made a cover version of Depeche Mode’s “New Dress”, but I noticed you also covered “Should I Stay Or Should I Go” from The Clash. What fascinates you making cover versions and what how do you proceed?

Gord: I love hearing covers from other bands, so I thought I should do some too! Really, it boils down to thinking of some altered reality where a great song was done in this genre, and how that would play out. I got some people upset at that Clash cover, but I think no song is untouchable. Next one is a classic from Michael Jackson!

Q: You made a few, but noticeable remixes. How is it working on a remix and what kind of result do you expect?

Gord: Working on remixes is so much fun. I always approach it as… ‘what if I wrote this song’. In some ways I guess it is the same as covering a song, but I use elements from the original artist tracks. I always take the vocal track and look to it for patterns in rhythm and go from there.

Q: You’re actually starting with a live band, so how do you try to transpose the sound of nTTx on stage?

Gord: I never just want to do a copy of the songs live just as they were on the release. By adding the live drummer and guitarist, I give them creative space to let them discover their own ways through the music. Neither of them are ‘from’ the genre, more rock, so they lend a different feel. The synths are somewhat similar, but when a different person is playing, they can’t help but put a bit of their own feel into it.

Q: What might we expect from your first full length album? Can you already reveal some details about sound and production?

Gord: So far, it is shaping up to be generally a bit more aggressive than the EP. Will still be a amalgam of EBM, pop and funk as they are my calling cards I guess. WTII is very supportive with me and let me go the way I want. There may be some partnered song writing on it too, we will have to wait and see.

Since you’re here … … we have a small favour to ask. More people are reading Side-Line Magazine than ever but advertising revenues across the media are falling fast. And unlike many news organisations, we haven’t put up a paywall – we want to keep our journalism as open as we can. So you can see why we need to ask for your help. Side-Line’s independent journalism takes a lot of time, money and hard work to produce. But we do it because we want to push the artists we like and who are equally fighting to survive. If everyone who reads our reporting, who likes it, helps fund it, our future would be much more secure. For as little as 5 US$, you can support Side-Line Magazine – and it only takes a minute. Thank you. The donations are safely powered by Paypal.
Tags: Atomzero, Comasoft, EBM, nTTx