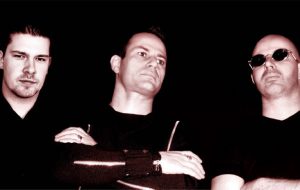 Sleepwalk celebrates their 25th anniversary by the release of the new album “Tempus Vincit Omnia”. Core member Bruno Ruch, Andreas Lehman and new member Charly (tEaR!dOwN) accomplished a double disc released on Electro Aggression Records. It’s without a shadow of a doubt the most accomplished and sophisticated work to date. The album is a sonic bridge between EBM and dark-electronics. I asked a few questions to Andreas Lehman.

Q: The new album “Tempus Vincit Omnia” became a quite special opus for celebrating the 25th anniversary of Sleepwalk, but still the first full length in 5 years, the second album without former singer Oliver Spring and also the first album on a new label (Electro Aggression Records)! What can you tell us about all these facts and changes?

Andreas: Oliver left the band in 2005. We are close friends. At this time I was at the same label (Scanner) with my project Framework. I wrote some lyrics and we had done some remixes for Sleepwalk already and I sang on the track “Shattered Soul” featured on “Rapid Eye Movement”, the last album Oliver was involved. So it was like a natural process that I became the new singer of Sleepwalk.

We released the EP “Revenge Of The Lost” and the conceptual album “Nibiru” at Scanner. The work on “Nibiru” was really exhausting. We felt like we need a restart. So we made that big cut and began to work without the feeling that there has to be a finished product in a certain time. Charly of “tEaR!doWn”, who is also a good friend, joined in to inject some fresh ideas. Nader of Electro Aggression Records was interested for years to work with us. It felt right and we are happy Nader supports our ideas.

Q: “Tempus Vincit Omnia” can be translated into English as “Time Conquers All” so what’s the deeper significance behind this title and what’s the possible link with all what happened inside the band and the lyrical themes of the songs?

Andreas: The lyrics reflect my thoughts on the current world situation. Much is changing. And as much as we destroy this planet and ourselves, time moves on. We are transient. Time is the only constant.

Q: I experienced this new opus as the most accomplished Sleepwalk album to date; there’s a perfect twist between dark-electronics and EBM, but it still is a sophisticated and intelligent opus. Tell us a bit more about the writing and production of the album and what have been the main changes with the past releases?

Andreas: Thank you! We are three people living in three different locations. So most of the work is sharing files, work on them and send them back to each other. The main change was working with three people instead of two. In the end we had nearly 30 demos we could choose from. That was really comfortable. It was good to work without any pressure and we even didn’t pressured ourselves. We spent a lot of time experimenting with effects, samples and new synths. It was worth it.

As I said earlier, “Nibiru” was a conceptual album. The topics of the lyrics were limited. That is sometimes really demanding and frustrating. This time I could write really free. An important change that brought a lot of creativity back. We decided early to go back to our roots with the sound and bring it to a new level. The reactions to the album reflect this. We are glad it worked that well.

Q: A singer always is the front man of a band so how did it felt to replace Oliver Spring?

Andreas: To be honest, I really didn’t thought about how it feels. Oliver and I are close friends for many years. We respect what we do and did with our projects. Sometimes we are working together on lyrics or songs. He also wrote the lyrics and did the vocals on “Downfall” featured on the new album. He is a part of 25 years Sleepwalk history and we wanted to appreciate this.

Q: The second disc features multiple remixes, but still a few new cuts. Tell us a bit more about the ‘new’ songs and what do you like in getting remixed by other bands dealing with a similar music style?

Andreas: There are 4 new tracks on the second disc. We had to make a choice which tracks should be on the main disc, but the remaining tracks were too good to leave them unheard. I don’t want talking too much about every track, but one is really special. Bruno and his brother Roland lost their mother. They’ve written “Embrace” specially for her. Even if it doesn’t sound typically Sleepwalk-like, it was very important for both of them to have it on the album. I think it helps both to overcome this stroke of fate and to give their mother a worthy memory.

The remix part is always exciting. Sometimes you get a totally different view at your songs. And even if most remixers are dealing with a similar music style, the results are amazing. You hear if someone has fun with your material. It also brings some new ideas for forthcoming tracks.

Andreas: It’s hard to describe, but I will try. Sleepwalk is like a trademark that stands for a typical sound. Everyone, we included, are expecting this. But we are not only creating music, we are also consuming it. Many influences wouldn’t fit in the concept of Sleepwalk. Therefore we are all involved in other projects to create some more music beside Sleepwalk. I wouldn’t say that Sleepwalk brings something which we don’t find in other projects. It is more that we are all music addicts. And every project fulfills a preference. Sleepwalk is maybe the evil twin of all. Something that splits conventions. A place to canalize the darker emotions.