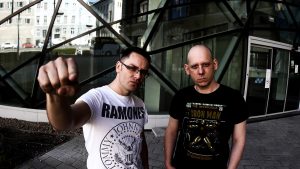 Hungarian duo Karl Zack and Victor Miller set up Schyzzo.Com in 2004. ‘Schyzzo’ stands for musical schizophrenia; the band wants to react against the different musical styles they like. It sounds a bit weird, but the music featuring heavy breakbeats and icy synth lines is hard and dynamic. The last year released “Clash”-EP is a terrific piece of music, which I can only, but highly recommend. I’ve been in touch with Karl Zack who has a real clear opinion about the electronic underground scene.

Q: Schyzzo.com has been set up in 2004. How did you guys get in touch and what have been the main facts from your career thus far?

Karl: The main fact is the long road and the footsteps. We are trying to release the break of people, set the energy free… and our live shows where we can see the energy of the audience. This is really fascinating and definitely the most important thing we want.

Q: You definitely are the most atypical band from the Advoxya roster so how does it feel to have label mates mainly dealing with dark-electronics & EBM and how would you define the sound of Schyzzo.com?

Karl: Haha yeah, we are ‘different’ from the other bands signed at Advoxya. Well, I think the electronic underground is funny and deplorable nowadays; different bands with dozen music and without creativity. We don’t want to join this ‘club’. We are trying to make an aggressive fusion with breakbeat, punk, electro and EBM… with a minimal dark feeling while not following the temporary, bored stupid fashion.

Q: Your music often reminds me to early The Prodigy (for the breakbeats) and Empirion (for the raw electronic leads). What fascinates you in breakbeats and can you give us more details about your sound properly speaking?

Karl: Hmm it’s so strange because I think we are not similar to Prodigy, but this is the first impression for many people. Well, it’s so honorable and I’m proud of it… Its sounds good…lol. The breakbeat is the basic rhythm form for many styles; full of power and strength, classic and modern in one time. For Schyzzo the most important things are energy, force, craft.

Q: Tell us a bit more the composition and recording of “Clash” and what do you consider as being the strongest elements of the album and maybe aspects you want to improve in the future?

Karl: The recording of the new album was a little bit complex because of using that different instruments and hard vocoder themes… It wasn’t an easy task.

We definitely use only hardware equipment, but sometimes this aspect is useless. I think on further stuff we’ll include some software solutions, but the main thing remain the synthesizers!

Q: I noticed you don’t release new work on regular basis so what are you doing in the meantime and what have been the elements that inspired you to start writing “Clash”?

Karl: The inspiration is constantly present, but the main point is time! It’s not a secret we need much more time to compose then others and the reason simply is quality. Sometimes the full scoring will be changed.

For “Clash” I wanted to write the hardest underground electronic release of 2017. I’m fed up with the endless list of boring productions released over the past few years; it sucks.

Q: The sound of Schyzzo.com is the perfect music to play live. How do you see yourself as live band and what kind of shows do you try to bring? Any further live plans?

Karl: Because of this political environment it’s definitely complicated. Some gigs and the organization are suffering from a lack of professionalism and I think the shows are sometimes useless. I know this scene, and we don’t want to elevate just the number of shows, we want to elevate the quality and the size of the shows.

Believe me, the time in the studio is priceless for a musician.

Since you’re here … … we have a small favour to ask. More people are reading Side-Line Magazine than ever but advertising revenues across the media are falling fast. And unlike many news organisations, we haven’t put up a paywall – we want to keep our journalism as open as we can. So you can see why we need to ask for your help. Side-Line’s independent journalism takes a lot of time, money and hard work to produce. But we do it because we want to push the artists we like and who are equally fighting to survive. If everyone who reads our reporting, who likes it, helps fund it, our future would be much more secure. For as little as 5 US$, you can support Side-Line Magazine – and it only takes a minute. Thank you. The donations are safely powered by Paypal.
Tags: EBM, Schyzzo, Schyzzo.com