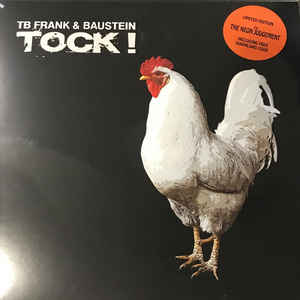 Background/Info: TB Frank known as one of the legendary Neon Judgement members and Baustein (Wouter Berghmans) are musicians from a different generation and yet connected by the fascination of sounds and simply writing songs. This debut album got introduced by the EP “Mother Of Earth” (cover from The Gun Club).

Content: “Tock” is a crazy work symbolized by the weird front cover. Both artists seem to have exorcised a lot of ideas, which are moving from funk to dub to minimal electronics to a great final technoid cut reminding to Praga Khan.

+ + + : “Tock” sounds like pure fun and I can imagine that’s what musicians like when working together. The album is bringing music genres closer to each other. There’s no real main style running through this work rather the love for music. I especially like the final track, which is a great electro/technoid song that might appeal for Praga Khan lovers. I also like the more minimal-like “I Didn’t” while the electro-wave driven “Margarita” is another noticeable piece. Sound-wise there’s a great twist between the easy recognizable guitar playing of TB Frank and the electronic parts.

– – – : The main strength of an album can be also its main point of discussion. There’s less cohesion between the songs so in the end it’s pretty hard to label this project. No doubt about it the artists don’t really care about labels and music genres!

Conclusion: “Tock” sometimes sounds as a compilation instead of a real album, but in the end it’s a pleasant release.