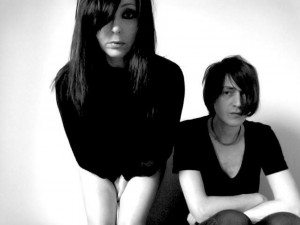 Alessandra Gismondi and Luca Bandini is the Italian duo behind Schonwald. Their music is inspired by the 80s and more especially by shoegaze and post-punk while appealing for fans of the 4AD label. A few months ago now they released their third opus “Between Parallel Lights” on The French labels Anywave and Manic Depression Records. This album confirms their fine taste for dark music.

Q: Can you briefly introduce yourself by telling us the way you met and set up Schonwald?

Alessandra : We met a way back when Luca was still attending the school of  Fine Arts and I got involved as musician in another band. We fell in love and then Luca started playing guitar to finally become a member of the band I was involved in. Later on we decided to create the project Schonwald,  which is our main project now.

Q: It all sounds like you guys are inspired by some legendary 4AD bands, creating a mix between shoegaze, dream-pop, post-punk and new-wave. How would you analyze your sources of inspiration and tell us a bit more about the ‘sound’ of Schonwald?

Alessandra : Of course we are big fans of the legendary 4AD bands and we grown up listening to Cocteau Twins, Clan of Xymox, Bauhaus, Lush and many others. Trying to analyze our sources of inspiration we could say that it’s  strongly influenced from our own town. We live in Ravenna, which is a small and beautiful town full of history located near the Adriatic Sea. It’s characterized by churches, marshes, swamps and fog. These places especially in Winter are very suggestive and rich of gloomy atmospheres. So it’s very easy to get inspiration to create our music.

Q: How do you look back at your latest full length “Between Parallel Lights” and what have been the main changes/evolution compared to previous albums?

Luca: Our previous album “Dream For The Fall” is more into deep and dark atmospheres. “Between Parallel Lights” is basically focused on hypnotic melodies mixed with tribal rhythms, sick noise synths and cold guitar riffs.

Q: I noticed all of your albums have been released on CD format, but still on vinyl. Is it all about 80s nostalgia? And what does it mean to you to get your work released on vinyl format?

Luca: Vinyl is the format we prefer so for this reason we feel very proud and lucky that Anywave and Manic Depression Records mainly release their bands on this beautiful format!

Q: You clearly seem to be a successful live band so what makes the magic of Schonwald on stage and what has been your best live memory so far?

Alessandra: Playing live is an emotional waterfall. Playing together on stage is an intimate situation between us and even people can get involved with this passion. The best live memory so far was at the ‘Wave Gothic Treffen’ 2015 because it was the last show of 50 gigs from the “Dream For The Fall” tour.

Q: What might we expect from Schonwald during the next few months and are you already working on new songs?

Luca: During the next few months we’ll play through Europe and we are very excited to play in Moskow and Saint Petersburg for the very first time in July. At the moment we are working on new songs which will be recorded very soon.