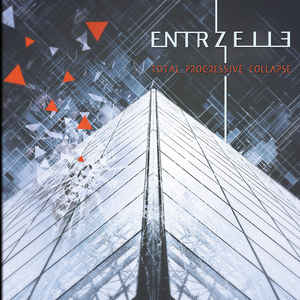 Background/Info: David Chamberlin and his sonic brainchild (cf. Entrzelle) last year joined the Alfa Matrix roster unleashing the EP “Set These Walls On Fire”. One year later the new album (Entzelle already released a debut full length “Part Of The Movement” in 2012 and got re-released on Alfa Matrix a few months ago now) is a fact, being for sure a consecration for this American artist.

Content: The sound of Entrzelle clearly finds its inspiration in some pop fields, but it has been adapted into a sophisticated and intelligent composition. Some icy, evasive elements remind me now and then to Haujobb. It’s a kind of fusion between glitch-pop (for the complexity and experimental touch) and future-pop (for the carrying leads). The sound is not exactly the most accessible one, but definitely appeals for lovers of sound manipulations and great arrangements.

The arrangements are a quite noticeable and essential aspect of the work. Chamberlin moves in between sensitive and refined piano-like arrangements and harder, epic-minded arrangements. It all depends from the kind of song and the global mood hanging over it. The songs are carried by danceable vibes and are even moving into a brilliant trance-minded apotheosis.

I wasn’t that enthusiast about some vocal parts on the previous album, but I have to admit this is an element that has been seriously improved.

The bonus disc of the limited edition features a few extra songs plus remixes. Some cuts have been boosted into potential club mixes and I here have to mention the great contribution from bands like Avarice In Audio, Venal Flesh and Cutoff:Sky.

+ + + : This album stands for intelligent electronics resulting from the mix of pop elements and a very personal and complex approach. This work is the imaginary hybrid between the cold and atmospheric work of Haujobb and the sound chemistry of Seb Komor.

– – – : The complexity of the production is not always the most accessible one. Entrzelle doesn’t really belong to an established and stereotypical music genre so it will be not be easy to achieve a wider recognition. It all sounds like a big challenge to catch a wider audience.

Conclusion: “Total Progressive Collapse” is an interesting challenge and a view upon possible further electro-pop standards.