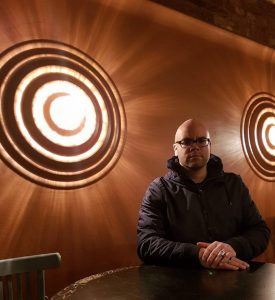 Jérôme Reuter is a real phenomenon; not only because he’s one of the single renown artists from Luxembourg, but because he never stops to take his audience by surprise. There clearly is a progression and evolution in sound and influences from album to album. His newest work “Hall Of Thatch” only confirms this development. The album released on Trisol has been announced as one of the most personal and intimate releases from Rome. I think it first of all is one of his most passionate productions to date.

Q: Your label Trisol has announced the new album “Hall Of Thatch” as ‘the beginning of something new’. Do you agree with this statement and what is this ‘new beginning’ all about?

Jérôme: It’s certainly a new sound, a new sonic identity for ROME. However, everything changes constantly. Impermanence is as much a part of ROME as being steadfast. Stubborn, really.

Q: On “Hall Of Thatch” you seemed to have been inspired by your travel to Vietnam. How did you transpose these influences and impressions into your music and lyrics?

Jérôme:  I didn’t try to transpose anything – that wasn’t the exercise, really. The idea is to plunge into something wholeheartedly and write ‘under the influence’. Whatever comes out might not mirror your experience, but your voice has changed nonetheless.

Q: I’ve been intrigued and can only, but agree with a statement you made: ‘The majority of the diseases we have today are political diseases’! Do you think artists can incite people to (re)consider some of these things?

Jérôme: Artists have done so in the past, sure. And it’s likely today as well, but that’s not part of my job description. I’m beyond hope and only really interested in dignified survival at this point.

Q: I remember you like Jacques Brel, but on your past few recordings I can’t get away from the idea you’re still a secret admirer of Nick Cave and even The Birthday Party. Do you feel related with this –or other artists in the way of writing, producing music?

Jérôme: I was a huge Cave fan as a teenager and have never tried to deny it. I guess he’s still in my system. You can’t bleach that stuff out of you. Same for Cash, Cohen, Waits, Brel, Ferré… I think he’s a really great artist who never lost his vision -mostly by constantly changing it, I presume. Which is mostly true for all these men I admire, I guess.

Q: The vocals on “Hall Of Thatch” are pretty passionate and sometimes even enraged. So what is it all about and did it happened naturally to sing a more enraged way?

Jérôme: Yes, I kinda stumbled into it. It just happened and felt awkwardly right. These songs just needed a different timbre.

Q: I want to get back to your previous album “Hansa Studios Session”, which must have been like a dream coming through, right? What did you keep in mind from this experience and do you think this kind of experience will have an impact on your further way of working and especially recording your music?

Jérôme: No, I can’t really afford that way of recording, unfortunately. It won’t impact future releases, I’m afraid. It was a once-in-a-lifetime opportunity we had to grab and a huge honor, of course. It’s crazy when you think about who’s recorded in there over the course of the last decades. It was a tremendous pleasure working with Michael Ilbert. Such a humble man.