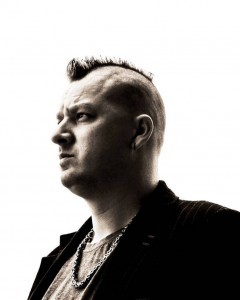 Every single generation gets some artists emerging from the mass. You’ve the ones that are composing ‘cool’ music and you’ve a selected number of musicians that will enter into history. Jan L definitely belongs to this restricted number of visionary artists that will be reminded for his great creativity.

Multiple dance floor killers like “Hit Me Hard”, “Warning”, “The Typical Fuck You Song”, “Tinnitus” made the name and reputation of NOISUF-X. The title of the new album “Kicksome(b)ass” features the main ingredients of the NOISUF-X sound, which is driven by hard-banging kicks and devastating bass lines! I get in touch with Jan L for the release of his new album, which is once again revealing new potential hits.

Q: You last year celebrated 10 years of NOISUF-X by the album “10 Years Of Riot”. What are the main elements you’ll keep in mind of these 10 years and do you remember what you expected when setting up Noisuf-X?

Jan L: The very first NOISUF-X track was released on my first official X-FUSION album. It was pretty industrial-sounding and did not fit to the concept of X-FUSION – so I decided to name that track “Noisuf-x” (X-Fusion backwards) to make things clear that this track was different than the others. I had a lot of fun producing this track, so I started producing more tracks and NOISUF-X was born.

When I started, it was ‘just’ a fun-project.. I didn´t expect anything – and I never thought that this project could be successful. I think the combination of Industrial and Techno made the difference with most of the bands – and a new genre was created. During the last 10 years I had many great live shows all over the world and I met a lot of great people. For me NOISUF-X is still a fun project, because I can do whatever I want – but I take my work seriously.

Q: The new album “Kicksome(b)ass” holds on the familiar NOISUF-X elements, but it definitely sounds more ‘industrial’-like as well. Are you aware of this evolution in sound and what kind of album did you want to achieve?

Jan L: Yeah, I have to say that when I started NOISUF-X, I distorted nearly every single element in a song – that´s the reason for the rough sound in my older songs. But I noticed that it just sounds rough – but not very powerful. So I reduced the distortion over the years to bring more punch to the tracks. I think this is the main thing that people recognize when comparing older stuff with the newer stuff. But I also started to experiment with different styles.. Ska+Industrial, Dubstep+Industrial, EBM+Industrial and so on. These experiments also influenced the sound of NOISUF-X over the years – so yes, I am aware of this evolution – and for me this is a good thing. At one side I don´t want to sound like 10 years ago, but I never try to achieve a special sound when writing new tracks. I just produce what I like and what I would like to hear in the clubs.

Q: The title of the album clearly indicates a fascination for solid bass lines, which I think also became one of your trademarks as an artist. What’s the secret behind your taste for these ‘monstrous’ bass lines and heavy kicks?

Jan L: Maybe it´s because of my roots in the techno-scene. I’ve always liked pumping bass-drums and driving bass lines. Most pop-songs have the ‘Kick+Bass’ to support the melodies and vocals – and I prefer it the other way round, when melodies support the ‘Kick+Bass’. These are the elements that kick your ass. And I like to kick ass!

Q: The (spoken) samplings have been often really important in the work of Noisuf-X and are mostly like inspiring you to find the titles of your songs. What are your main sources to find the right samplings and when do you add them to the music?

Jan L: I use all kind of sources to find samples.. movies, TV, radio, Youtube and so on – and I also create some samples by myself. Sometimes I start with a sample and build a song that fits to it, sometimes I start with a song and next I’ve to search for a sample that fits to the song. But yes, these samples are important for NOISUF-X. Samples instead of a vocalist is the concept.

Q: I think you’re one of the few artists active at this scene with a real unique ‘sound DNA’. You directly recognize your sound and arrangements (and also on the numerous remixes you’ve done). According to you, what makes you different from the rest?

Jan L: Yeah, I know what you mean. And for me this is something positive – even if some would maybe say that it could mean that all tracks are sounding the same.

I don’t really know what it is that I´m doing a different way.. but what I know from my own arrangements is, that I don´t like to throw new elements in the mix without a break or an introduction – that´s why most of my songs have real long or short breaks. The other thing is that I noticed that many bands just throw in samples in a song. I prefer to work a lot on my samples. I transpose them, time-stretch them, distort them, cut them sometimes into 100 single syllables just to get them synchronized with the song as good as possible. That´s why the samples in NOISUF-X tracks are flowing with the song and do not sound like a foreign element.