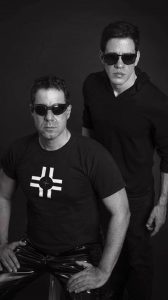 Richard Abdeni and Anthony Stuart set up Les Anges De La Nuit in 2003. This American duo got some recognition being directly signed to Infacted Recordings where they released two albums. After a hiatus of 9 years they struck back in 2015 self-releasing “Vanity Will Perish” and are now back with their fourth opus entitled “Darkness Looms”. It’s a new dark opus mixing elements of pop and future-pop. The album has been released on Les Anges De La Nuit own label Static Cold Media.

Q: After a break of seven years Les Anges De La Nuit  is back since 2014 and has released two new albums. How does it actually feel to be back in business and what are the main differences with your ‘early period’?

Richard & Anthony: Yes we did take a break for 7 years due to our personal lives and in 2014, we first released an EP with 8 new tracks titled “Out Of Sight” and then we went ahead with two new albums (“Vanity Will Perish” and “Darkness Looms”). It feels great to be ‘back in business’. One of the main differences with our ‘early period’ is that we are singing in French and we are able to express ourselves through 2 different languages.

Q: Your two first albums got released here in Europe on Infacted Recordings while you’re now self-releasing your work. Why this evolution?

Richard & Anthony: Our first two albums were released on Infacted Recordings in Europe and we keep a great ‘souvenir’ with Infacted. It also gave us some kind of ‘training’ with the music business and allowed us to learn the ropes of self releasing… It has nothing to do with the actual artistic part of composing but it is also a very demanding task… especially nowadays where the music business industry is so different than what is used to be like 10 or 20 years ago. It has also been a learning curve for us.

Q: Earlier this year you released the fourth album “Darkness Looms”. What means this new album to you and what did you try to express musical- and lyrical wise?

Richard & Anthony: “Darkness Looms” is a very special album for us… First of all, 50% of the album (at least) is sung in French so we can consider it as a ‘true’ bilingual album…

It did get overall some great reviews and has allowed us to reach new markets (such as French speaking countries). Although this album has some very dark intonations (the title for example) as it was written in dark and uncertain times, we also managed to include some very positive feels and vibes… We also did spend some considerable time on putting in image our thoughts and expressions through video clips. The first one  “Cette Jolie Brune” was released along with the album back in January. We have just finished shooting the new one “Ma Folie l’Infini” with a brand new reedited version. It will be released in a couple of weeks.

Q: Can you analyze the main characteristics of your work, which according to me are based upon dark atmospheres, strong and carrying melody lines, danceable rhythms and French and English lyrics?

Richard & Anthony: We consider our music to be ‘Electrodarkwave’ which includes Hi and strong and energetic danceable melodies, Futuristic waves, and dark lyrics in French and English… Some songs are better expressed in French and some other in English…

Q: It’s quite unusual to see an American formation singing in French! Do you feel related with other French electronic artists and what means this aspect, which I consider as an essential one in your ‘sound DNA’?

Richard & Anthony: ‘Sound DNA’… that is a cool expression. Yes happen to be trilingual (English, French and Spanish) and that allows us to be able to express ourselves through different avenues and means… Some things are better said in French… in English or in Spanish… and we have the great opportunity to explore that (in 2 languages for now)… Also the name of our band is in French so it would only be natural for us to sing in French. Regarding French influences, there are several acts that we enjoy very much from the classical (Mylene Farmer, Indochine,T21) to the more recent minimal (H0rd, Hante, Hard Corps…)

Q: Image is often a very important item for bands and a way to catch the attention. I got the feeling it never has been one of your main topics, right? What’s your perception about it all?

Richard & Anthony: Image and attitude are unfortunately two essential components of our society nowadays… however our focus is mainly about making music and trying to express ourselves through sounds and lyrics… We would rather be ourselves than pretend to be something we are not… it does not make it necessarily right but we do feel that way…

Since you’re here … … we have a small favour to ask. More people are reading Side-Line Magazine than ever but advertising revenues across the media are falling fast. And unlike many news organisations, we haven’t put up a paywall – we want to keep our journalism as open as we can. So you can see why we need to ask for your help. Side-Line’s independent journalism takes a lot of time, money and hard work to produce. But we do it because we want to push the artists we like and who are equally fighting to survive. If everyone who reads our reporting, who likes it, helps fund it, our future would be much more secure. For as little as 5 US$, you can support Side-Line Magazine – and it only takes a minute. Thank you. The donations are safely powered by Paypal.
Tags: Infacted, Les Anges De La Nuit