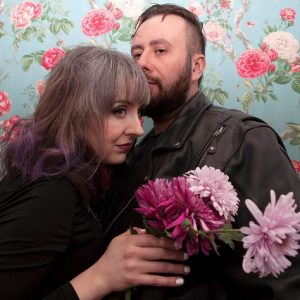 Ghost Twin is a Canadian duo set up and driven by Karen- and Jaimz Asmundson. The debut full length “Plastic Heart” released on Artoffact Records instantly became one of my favorite releases from 2017. The sound is not that easy to define, but clearly mixes different elements together. In the end we might speak about electro-wave or goth-pop. This is what Karen and Jaimz have to say about Ghost Twin and “Plastic Heart”.

Q: How would you introduce Ghost Twin to music lovers who never heard of you before?

Ghost Twin: Electronic music with supernatural themes featuring a good beat, a darker vibe, female/male vocal harmonies and a bit of shoegazy guitar pretty much sums up our sound.

Q: Tell us a bit more about your music background and how did you finally set up Ghost Twin?

Karen: I’ve studied classical music since I was a child – started with piano and then voice. I joined my first band as a synth player just after high school, it was called Celine’s Real Killer and played electronic pop music with semi operatic vocals in Portuguese.

Shortly after that I formed an art-rock band called Querkus, and we kept that project going for many years.  It broke up in 2011 while we were on tour. In the aftermath of Querkus I was tired of band life and needed to take a break. It was in Summer of 2012 when Jaimz presented me with the idea of Ghost Twin. I was intrigued, but worried that having a band together might destroy our marriage. But I took a chance on it, and it has really enriched our lives. It’s the most fun I have ever had making music!

Jaimz: I have little to no musical training, my background is mainly in filmmaking. I often hear random bits of music in my head, or dream about writing music or listening to a song that I ‘finished’ in a dream, so I’m often humming these bits of music/lyrics into my phone and likely look like a crazy person.

Before Ghost Twin, I became very interested in live expanded cinema performance. I did a performance of one of my films, along with the composer (Jeremy of Distorted Memory), at a festival in Iceland and I got the performance bug. I approached Karen about possibly doing some type of collaboration to incorporate some live film performance along with music, which is how Ghost Twin was born. All of our songs are quite visual in terms of lyrics and cinematic arrangements, so it lends well to adding live visuals into the mix.

Q: What does the debut album “Plastic Heart” mean to you and what have been the main facts you keep in mind from the writing and recording?

Ghost Twin: The overarching theme of this album is surviving together. There are many supernatural aspects to the lyrics, and many references to our personal life experiences filtered through an occult lens. On the surface, “Plastic Heart” was named for the planchette of a ouija board.  But plastic also means transmutable, to have the heart change over time through experiences.

Q: I noticed you worked together with Maya Postepski (Austra, Soldout ao) who played some percussion parts, added vocals and co-produced the album. What’s the impact and importance of an ‘external’ member?

Ghost Twin: When it came time to start thinking about recording our album, we knew that we wanted to work with Maya. She was very instrumental in the sound of the first Austra and Tr/st albums, which both really inspired us to start this project, so we wanted to have her involved. She added so much detail to the percussion tracks and also served as a ‘shit filter’ – telling us when our ideas were good or bad. This feedback brought forward a much better album than we could have ever made on our own. And she was also super fun to have around.

Q: I experienced “Plastic Heart” as an album bringing multiple influences together and which has been introduced as ‘where Baroque meets Industrial’. Tell us a bit more about this ‘meeting’, potential sources of inspiration and the composition properly speaking?

Karen: I don’t think we set out to try to blend genres – we just have a wide range of musical interests and have a hard time ‘writing for a certain style’. We met in a goth club way back when – and I hear the influences of many goth night anthems in our writing and production. I borrow a lot from Baroque music as it is my very favorite style to sing in. Industrial music has always been Jaimz’s favourite. A weird influence, particularly on the male/female harmony vocals) is a Canadian group from the late 60s called The Poppy Family. That being said, the album sounds cohesive to me. A meeting and blending of all this different music we love into something new.

Q: Live performances seem to be important for you so tell us a bit more about this essential aspect and do you’ve plans/opportunities to play in Europe?

Ghost Twin: We really love playing together and our stage rapport and energy carries into the audience. Everyone ends up having a good time. The live performance aspect is quite central to this project and the reason it started. Our performance includes live triggered visuals, which we have mined from many underground and horror films, that we play back in time with the music to create a visual language of symbols and images that further express the content or aesthetic of our music. For some tracks, we’ve sampled visuals that also have percussive sounds, so both the percussion track/live visuals are actually made up of movie samples.

As for touring in Europe – no set plans at this time but it is something we would dearly love to do.  So if you are a promoter reading this: please get in touch with us!