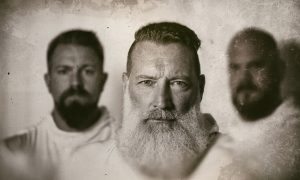 First time I heard Eisfabrik I got instantly seduced by their powerful mix of dark-electronics and future-pop. Regarding to their concept it for sure is one of the craziest bands I’ve seen in years, but still one of the most original ones composing great music. They have released their third album  “Achtzehnhundertunderfroren” on NoCut/SPV a few months ago, which was a very good reason to get in touch with ‘Der Frost’.

Q: Let’s start with a traditional question, how did you get in touch with each other and decided to set up Eisfabrik?

Der Frost: Dr. Schnee and me know each other since 2011. He was the lead singer of a band with which I was on tour with my own band. We kept our contacts, so once during the next Winter he sent me a song with his vocals. The original song was an old instrumental one from one of my former bands. I was very impressed what he made out of this, so we started to make some songs together.

We both knew Celsius from different activities in the past and noticed that he left his old band. A third guy who likes stage performing, managing and all the organization stuff he uses to do, could be very useful for us. Furthermore he’s a very nice and cool guy! So Eisfabrik was found.

Q: When I first heard Eisfabrik I thought it was a new band set up by… Funker Vogt and Assemblage 23! What are the real sources of inspiration and what kind of sound did you have in mind?

Der Frost: I always try to make a kind of dance music with a cool sound and catchy melodies. My roots are in the electronic scene since over 25 years. That’s why it’s not surprising that our sound may offer some similarities to any other band. But I think that our sound has its own face, also because of Dr. Schnee’s voice which is very unique, I think.

Q: There clearly is a kind of original concept behind Eisfabrik, which we find back in your nicknames, but still in most of the titles. Where did you get this idea from and is there any deeper meaning?

Der Frost: As we were searching for a name for this band, we just listed up what we thought about our sound and our whole impressions to this. We thought that the sound had a certain coldness which made us think about words like ‘snow’, ‘ice’ and so on (German = ‘Schnee’, ‘Eis’). And the fact that everything is made with machines made us recalling the term ‘factory’ (German = ‘Fabrik’). So it ended in the very suitable name Eisfabrik. All the image and lyrics are built on this.

Q: The concept is also present on stage, which I think is important for the show and the audience! What did you try to express on stage and can you already reveal some details about the upcoming tour?

Der Frost: We certainly want to enforce our own image by different visual effects. Therefore everything looks cold and somehow futuristic. Beside some basic light stuff there are effects like for example a walking robot which is about 2.5 meters high. A Yeti is running and dancing on stage. It also may snow, if we’re in the house. And also a few things more which will give our show this icy feeling.

Q: How do you look back on the albums “When Winter Comes”, “Eisplanet” and “Achtzehnhundertunderfroren”? Do you see an evolution in sound & production?

Der Frost: Of course, our sound has become more dense and even more compact over the years. It seems that everything does fit perfectly together at the moment. But I think I will say this in two years again and in four years also and so on…

Q: The new album “Achtzehnhundertunderfroren” has been released a few months ago now so do you see some elements in the production you want to improve or maybe arrange a different way on the further album?

Der Frost: I think every musician becomes gradually more professional sounding song by song he or she creates. You don’t notice these very little steps by yourself. Maybe not even from album to album. For the moment I don’t know what I will improve in the future. But I’m sure there will be something.